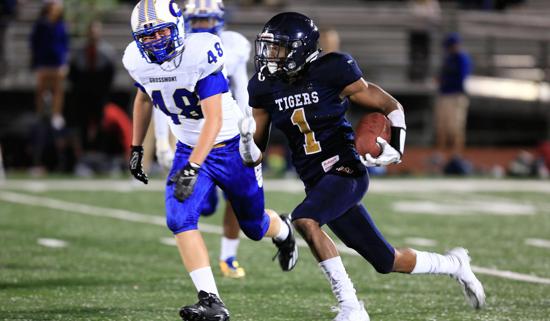 Markus Turner is a dual threat at quarterback for Morse.

Morse High knocked off Chula Vista 37-21 as its three offensive stars paved the way for the Tigers’ first win of the season.

Senior quarterback Markus Turner, junior running back Martell Irby, and junior wide receiver Timothy Patrick Jr. ran at will for most of the game as the Tigers’ offensive line was able to control the line of scrimmage. Turner, a dual-threat QB, kept the Chula Vista defense on edge, evading rushers and becoming a lethal runner once in space. He ran for 182 yards on 19 carries and touchdown.

Patrick Jr. was used primarily as a zone-read option, taking handoffs as he sprinted behind the line and then past defenders. Patrick, Jr. broke off one electric run after another, with defenders unable to match his blazing speed. He had touchdown runs of 37 and 50 yards, respectively, in the first half. He added 16-yard TD catch in the second half.

Turner and Patrick, Jr. weren’t only ones dominating on offense. Irby ran physical all night, running through arm tackles and picking up extra yards after initial contact. Irby had a touchdown runs of 3 and 30 yards, respectively, and threw in an interception while playing defensive back. He finished with 15 carries for 110 yards and two touchdowns.

The Tigers failed five separate times trying to convert either an extra point or two-point conversion.