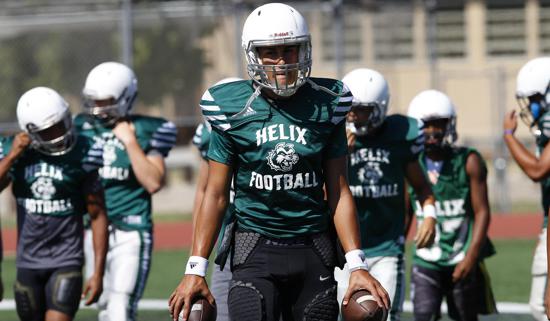 Helix quarterback Carson Baker is working to get the offense in gear.

CHULA VISTA — While it may not be functioning on all cylinders, the Helix offense can still light up a scoreboard.

The second-ranked Scotties showed that Friday night, getting a pair of touchdowns each from Ezekial Noa and Scott Young to down host Eastlake 42-7.

“I’m not as happy with the offense as I thought I would be,” said Helix first-year head coach Robbie Owens. “We’ve played a tough schedule so far but we just want to represent what Helix is all about.”

First the Titans’ Adrian Hernandez picked off a Carson Baker pass at the goal line to end Helix’s first possession. Their second possession lasted just one play when Eastlake’s Declan Fernandez recovered a fumble at the Titans 37-yard line with 6:49 left in the first quarter.

With 2:28 left in the first quarter a mix-up in the Eastlake backfield allowed Young to recover the fumble in the end zone for a 7-0 Helix lead.

The Helix defense held Eastlake without a first down until the 1:30 mark of the half. They followed it up with quarterback Alfredo Garcia connecting with Jae Vitin for a 13-yard score to cap a 65-yard, 10-play drive.