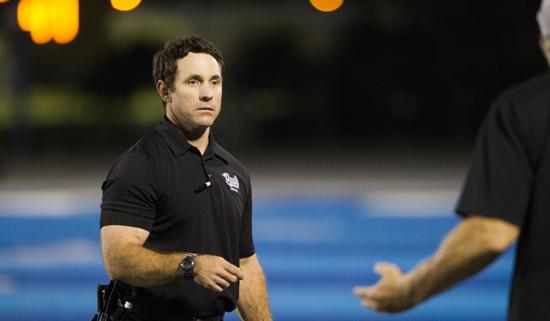 SANTEE — When West Hills quarterback Hayden Roach isn’t calling his own number, most of the handoffs and pitches go to Griffin Guinn and Jovan Bea.

Every once in a while, Austin Dill gets the call.

On just his second carry of the game — the first went for no gain — Dill took a pitch left midway through the fourth quarter and scampered 29 yards for the winning score as West Hills defeated Mission Bay 21-14 Friday night on the blue turf at West Hills.

“He took advantage of that one, that’s for sure,” West Hills coach Casey Ash said.

Dill’s winning score was set up by a blocked punt by Caden Kulas that gave the Wolf Pack (2-1) the ball at the Buccaneers’ 38-yard line.

Mission Bay (1-2) had rallied from a 7-0 halftime deficit, taking advantage of a pair of fumble recoveries to go up 14-7 late in the third quarter. Schyler Ceniceros recovered the first one that led to an 8-yard TD run by Kenyon Sims, who finished with 137 yards on 24 carries.

After a 24-yard gain by Roach, Mission Bay’s Eric Purma pounced on a fumble that eventually led to a 19-yard scoring pass from Jaiden Correa to Marcus Nickerson.

West Hills made it 14-14 early in the fourth quarter when Roach found Tyler Wilson on a 17-yard scoring pass.

West Hills scored on its first possession, driving 59 yards in seven plays with Bea tallying on a 10-yard pitch right for a 7-0 lead.

But that was all the scoring in the first half as the defenses dictated play. Mission Bay’s best opportunity came late in the half, but a 12-play drive stalled at the 23-yard line with three straight incompletions, including a pass defense in the end zone by the Wolf Pack’s Ricky Wilson.