Ups and downs of a prep quarterback

University City senior off to hot start this season, but Centurions stumble against Scripps Ranch 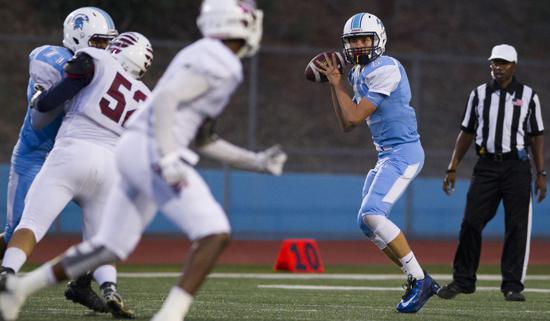 University City quarterback Kees Van Daelen looks downfield for an open receiver in Friday’s game against Scripps Ranch, which dealt the Centurions their first loss of the season.

Plus, he’s one of the San Diego Section’s leading passers.

It helped that the kid expected to be the Centurions’ starting JV quarterback last year broke his arm skateboarding. Van Daelen played quarterback on flag football rec teams in junior high. So when he heard there were going to be QB tryouts, he showed up.

“We were shocked he could throw the ball the way he could,” said UC head coach Ryan Price.

Sure enough, Augon suffered a concussion against Bishop’s. Van Daelen stepped off the bench and led the Centurions on a game-winning touchdown drive.

“It felt great to finally show what I could do with a lot of people watching,” said Van Daelen.

With Augon graduated, Van Daelen is now the unquestioned man behind center for UC (2-1), which stumbled Friday night in a 35-19 setback to Scripps Ranch. Van Daelen was 20 of 29 passing for 294 yards and two touchdowns, but he was outplayed by Scripps Ranch QB Kyle Mullin, who finished 24 of 42 for 436 yards and four TDs.

Van Daelen came into the game with 602 yards passing, tied for second in the section.

Making Van Daelen’s Accidental Quarterback story more fascinating is the way he plays the position, which might be described as unorthodox. His throwing motion will not be digitally burned and archived for a how-to passing video.

“He has the most awkward throwing motion,” said Price.

Rather than a classic, high-above-the-ear delivery, Van Daelen throws three-quarters and seems to push the ball more than throw it.

Told his coach dissed his technique, Van Daelen, whose grade-point average is in the 4.2 range, said, “I could agree with that.”

When Van Daelen takes off running, which is more than occasionally, his style does not give the impression he’ll one day replace Olympic decathlon gold medalist Ashton Eaton as the world’s greatest athlete.

In essence, Van Daelen is the human mirage. You see one thing and get another. Even his first name, Kees, is deceptive. Owing to his Dutch heritage, it’s pronounced Case.

Now, take all that aesthetic athletic mishmash, wad it up in a proverbial ball and toss it in the trash can. Paying his quarterback the ultimate compliment, Price said, “He’s a gamer. He just comes in and gets it done when you need to get it done.”

Added Granfors, “In clutch situations, he knows what to do. He makes plays out of nothing. He’s known for when a play starts going wrong, somehow he gets out of it, throws the ball deep and somebody scores.”

Sitting on a bench during practice earlier in the week, Van Daelen said, “Going into high school, I never thought I had what it takes to be a varsity quarterback.”

He was wrong. The skinny defensive end morphed into a quarterback.