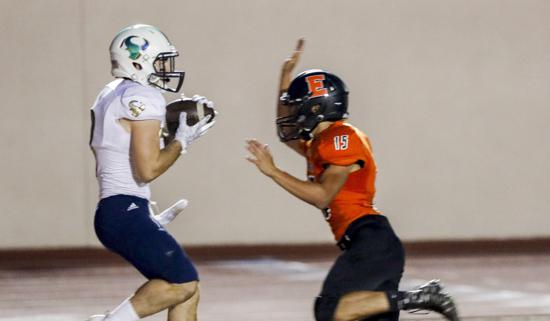 At least against Escondido.

A week after being upset by Mt. Carmel, which lost in last year’s San Diego Section Division II final to eventual state champion Rancho Bernardo, the Mavericks retained their winning ways against the Cougars.

Thanks to a 40-14 nonleague football victory over Escondido on Friday night, La Costa Canyon (2-1) has beaten the Cougars (1-2) all eight times they’ve played each other.

Mavericks junior quarterback Jake Neufeld led the way with three touchdown passes and he ran for a score as well.

Neufeld was 10 of 14 passing for 158 yards and the three touchdowns as the Mavericks bounced back with 416 yards total offense for the game.

Courtesy of an interception by Mark Roberts deep in Mavericks territory, La Costa Canyon needed just two plays to cover 94 yards with Brett Peuschel covering the final 33 yards for a touchdown in the first quarter.

The Mavericks opened the second quarter with a quick four-play, 45-yard drive for a 13-0 lead as Neufeld hit Goodkin for a 21-yard scoring pass with 11:53 left before halftime.

La Costa Canyon took 10 plays to cover 80 yards for its third score, which came on Neufeld’s 1-yard sneak with 3:33 left in the first half, pushing the lead to 19-0.

That gave a visitors a 234-73 edge in total yards in the first half.

By the end of three quarters, the Mavericks were in command 40-7.