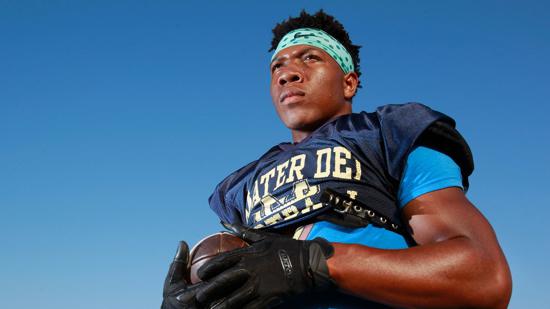 CJ Verdell is not perfect.

Just as the -bound, Mater Dei Catholic High running back drops defenders once he reaches the secondary, so does he regularly lose his wallet.

Plus, CJ and his sister, Zaria, a Mater Dei freshman, occasionally fumble when it comes to the dishes.

“We can never end the saga with those dishes,” said Christopher.

But when it comes to toting the rock all the way to the end zone — plus providing quiet leadership with a maniacal work ethic and caring about his teammates’ feats as much as his own — Verdell is as close to perfection as it comes.

After busting out of the shadows last season to rush for 2,135 yards and score 34 touchdowns while leading the Crusaders to a state championship, Verdell set his goals astronomically high for his senior season.

First carry of the 2016 season, against Valley Center, Verdell took a handoff and was supposed to pound between the right guard and right tackle. But the hole was stuffed, so Verdell cut left. He ran through an arm tackle at the line of scrimmage, made another tackler miss about 5 yards into the secondary, stumbled, regained his footing and was off.

Sixty-four yards from the line of scrimmage, he crossed the goal line. Touchdown No. 1 on a five-TD night as Mater Dei blanked Valley Center 35-0. The other touchdown runs covered 2, 23, 79 and 60 yards.

“The best thing I can say about him,” said Valley Center coach Rob Gilster, “is that if he’s even, he’s leavin’.”

Translated, once Verdell gets in the secondary, good luck catching him.

As good as he was against Valley Center, Verdell was even better last Friday at Los Angeles Hawkins, the 18th-ranked team in the state by MaxPreps. Verdell carried 28 times for 279 yards and scored five rushing touchdowns. He also returned a kickoff 97 yards for a score. On the season for the 2-1 Crusaders, Verdell has carried 58 times for 668 yards and has scored 13 TDs.

Baxter’s record, it seems, is within reach.

At 5 feet, 9 inches and a sculpted 198 pounds — seemingly 190 of it in his legs — Verdell resembles the prototypical running back. Low center of gravity and powerful. What separates him is his balance and how quickly he accelerates to top-end speed.

“His burst is different than most guys,” said Mater Dei coach John Joyner.

To get a feel for Verdell’s skill, google “CJ Verdell and Hudl.” The first link to pop up is an 18-minute, 59-second clip of his junior highlights, which has more than 20,000 views. You don’t have to wade through the entire footage. The second play tells the tale.

From the Mater Dei 1, Verdell veers left, stiff arms a tackler at the line of scrimmage, brushes off another tackler at the 3, lowers his shoulder through a defender at the 10, drops a spin move at the 14, pulls a Baryshnikov and tap dances the sideline, then it’s bye-bye, baby, a 99-yard TD, defenders treated to a fading view of his No. 5.

“That was insane,” recalled Mater Dei wide receiver/DB Quentin Frazier. “That was unbelievable. Definitely something I’ve never seen before.”

Verdell first played football when he was 9. Having never played the game — the family had just moved from Japan where the sport wasn’t offered — CJ cried on his way to practices.

Despite being the fastest player on the team, he played the offensive line. Christopher asked the head coach to give his son a shot at running back. First carry, CJ takes it to the house.

Said Christopher, “His lineman days were over.”

CJ’s paternal grandfather was a Mississippi Baptist minister, and you get the impression that two generations later, the apple didn’t fall far from the tree. Grandfather instilled valuable lessons in Christopher, and father handed them down to CJ, who reveres his dad.

“He taught me everything I know as far as being a man and a football player as well,” said CJ.

Sitting in the Mater Dei coaches’ office, sliding about on a swivel chair, Verdell breaks into a mega-watt smile recalling two messages his father passed to him and Zaria. One goes by the acronym WBN.

“Work hard, believe in yourself and never give up,” said Verdell.

The other: “Always be persuaded by your own opinions. Don’t let other people decide what you’re going to do.”

CJ’s impressive physique has been molded under Christopher’s watchful eye. An ardent weightlifter whose garage is filled with workout equipment, Christopher began training his son when he was 9. Father emphasized pullups, pushups and dips in the early years, adding high-repetition weightlifting when CJ entered high school.

The result: Verdell bench presses 305 pounds and can squat 465 pounds five times. In the past when they worked out and Christopher was ready to squat more weight than CJ, he’d teasingly tell his son, “I’m about to drop you off now.”

This summer, CJ put 405 pounds on a barbell, told his father for the first time, “I’m about to drop you off now,” and cranked out 10 repetitions.

Said Christopher, knowing his son had passed him, “I didn’t even attempt it.”

On campus, Verdell is known for his humility as much as his ability to run with the football.

Joyner sometimes doesn’t hear about colleges recruiting other players until Verdell breaks the news to him.

“These kids are his best friends,” said Joyner. “He’s as excited for them (receiving attention from colleges) as he is for himself.”

But again, Verdell is not perfect. Those first four touchdowns against Valley Center, Verdell celebrated modestly.

But on TD No. 5, the Crusaders’ No. 5 flashed the Oregon “O.” Upon close inspection, he was wearing Oregon gloves. When he pressed his index fingers and thumbs together, the gloves showcased a duck.

“I wasn’t thrilled about that,” said Joyner.

Memo to Joyner: while Verdell bagged the green cleats and Ducks gloves in the second game, he plans to reprise the “O” signal again.

Informed that Verdell plans a repeat, Joyner laughed. He loves the kid, as much for his attitude as his aptitude. Punishment, though, will be meted.

“He can do it on Friday,” said Joyner. “But he’s going to pay for it on Monday.”