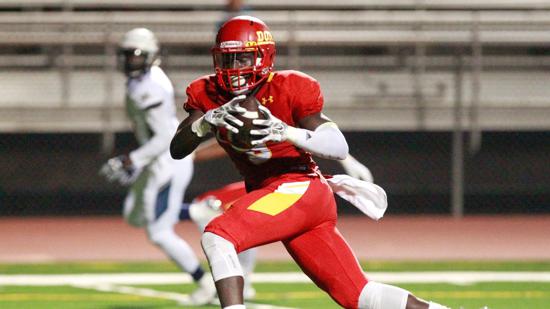 Ikea, H&M clothing, Volvo and Saab, all famous Swedish exports. Football players? The kind who chase the oblong-shaped pigskin, not a round soccer ball?

But at Cathedral Catholic High, senior safety Jordan Genmark Heath roams the secondary for the No. 2-ranked Dons, one play smacking running backs in run support, the next ranging sideline to sideline in pass defense.

“Definitely one of the top players that I’ve seen in San Diego as far as the defensive back position,” said Helix coach Robbie Owens.

Notre Dame and Stanford haven’t offered free rides yet, but are recruiting him.

It’s all heady stuff for the 6-foot-2, 205-pound Genmark Heath, who was born and raised in Stockholm and didn’t move to San Diego until he was 15. His biological father is Jamaican, his mother was born in Uganda, and Cathedral teammates good-naturedly call him “The Swedish Black Guy.”

Genmark Heath’s stepfather, Krister Genmark, is an Anglo-looking Swede who grew up fascinated with the United States. He taped an American flag to his bedroom wall when he was 4 and built models of American fighter jets.

Krister visited the United States for the first time when he was 15, vacationing in San Diego.

“That’s when I basically decided that one day I was going to live in San Diego,” he said.

How Genmark Heath became smitten with American football is one of those romantic yarns that depends upon who’s spinning the tale. Jordan says he had a cousin who was five years older and wanted to play football, but didn’t want to sample the sport alone, so he roped Jordan into playing, too.

Krister vouches for that version, but with a caveat.

“I had been a fan of this type of football my whole life,” he said.

Before the cousin wanted to strap on shoulder pads and helmet, Krister and Jordan sat on the couch, watching NFL games.

Football is a club sport in Sweden, and Genmark Heath began playing when he was 8.

Sitting in a Cathedral Catholic office, looking sharp in a red Dons polo, he recalled his early love of the game.

“This is what I like. This is my own thing,” he said of the allure. “That brotherhood-of-the-team component.”

When Jordan was 13, he woke up at 1 a.m. and ate hamburgers Krister had cooked to gain strength. He’d return to bed, wake up before dawn and hit the gym to train.

“We never really pushed him to do anything,” said Krister. “He always had this ambition. He came up with these goals for himself very early.”

In the summer of 2015, Krister’s teenage dream of living in San Diego and his stepson’s goal of playing American high school football coalesced. Krister landed a San Diego job in the aviation industry. Jordan enrolled at Francis Parker.

He played on the varsity at Parker as a freshman, starting at safety, throwing up before games.

“It was nerve-racking,” he said.

In the first game of his high school career, Genmark Heath ran down a wide receiver, stripped the ball out of his hand, recovered it and returned it for a touchdown. The Hollywood script required editing after the TD was called back by a penalty.

A week later, he caught a go-ahead touchdown pass late in the game.

“It was amazing,” said John Morrison, Parker’s head coach at the time.

After two seasons at Parker, Genmark Heath, who lives in Kensington, transferred to perennial-power Cathedral Catholic to play football at a more competitive level.

“I wanted to be challenged to be the best I could,” he said.

Genmark Heath sat out the first six games last season because of transfer rules. In a serendipitous stroke, Cathedral’s starting free safety came up injured the seventh week of the season.

Genmark Heath has been a starter at the position ever since.

Football, though, is only part of the young man’s story. He was immensely popular at Parker — “He’s a kid magnet,” said Morrison — and is the same at Cathedral.

“He’s smiling all the time,” said Doyle. “I’ve literally never seen him down.

Genmark Heath volunteers in Cathedral’s Options Program, where students mentor intellectually disabled students who attend the school. Since the beginning of the semester, Genmark Heath has worked with Thomas Byrne, a freshman with Down syndrome.

“Their relationship is quite special,” said Megan Burton, Cathedral’s director of academic support, who oversees the Options Program. “Thomas at times can shut down, become frustrated, and Jordan is able to get him back on task.

“Thomas certainly looks up to Jordan as a role model and not just because he’s a football player. It’s because he’s an exceptionally compassionate individual.”

Said Genmark Heath, “Cathedral is a family, and we take care of our own.”

He will play football in college, but the question is at what position. At running back, he has scored two rushing touchdowns this season. As a receiver, he averages 30 yards per catch and has scored two more TDs.

Stanford sees him as a wide receiver. Cal envisions him as a safety or running back. Northwestern is thinking strong safety or outside linebacker.

Asked what position he wants to play, Genmark Heath said, “Wherever I can get on the field the fastest.”

Meanwhile, “The Swedish Black Guy” dreams. According to databasefootball.com, only seven native Swedes have played in the NFL.