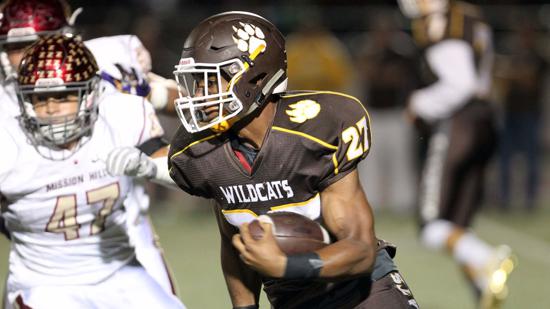 Players to watch: Isaiah Ramos, who threw for 1,772 yards and 17 TDs, has moved to Utah with his family, so senior Troy Bloomquist takes over at QB. TE-DE Cameron Thomas is a three-year starter who has committed to San Diego State.

At a glance: The Lancers were 4-8 last season, but three of those losses were by a TD or less. The WRs are young, but MacNeal says it might be the best group he has had at Carlsbad. The OL is big and experienced. Chandler Patterson and junior Carlos Harrison are considered college recruits. Gage Samala, Rob Casey and Logan Plasch are returning starters. Luke Armstrong will be the primary RB. Junior DB Asa Turner has turned into one of the hottest recruits on the West Coast. Junior LB Duke Paane is drawing interest from colleges. LB Logan Ogan is a two-year starter and DE Tarek Carnes is a three-year starter.

At a glance: Casey has talented WRs to throw to. Wayne Steward caught 71 balls for 1,011 yards last season. The explosive Malachi Russell has transferred from Orange Glen, where he had 87 receptions for 1,724 yards and 24 TDs. The OL is big but lacks depth. Uluaki Katoanga, who had 48 tackles last season, anchors a solid group of linebackers. CB Kameron Bullock, who had 26 tackles and four interceptions, leads the secondary.

Players to watch: Quick-footed QB Jake Neufeld threw for 1,684 yards last season but must improve on his 49.8 completion percentage and cut down on his 13 interceptions for the Mavericks to move forward. He performed well during the summer. LB Cade Madeira is a force on defense with 56 tackles and 51/2 sacks last season.

At a glance: The Mavericks return 26 lettermen from a 6-6 team, including 10 starters. RB Karson Lippert, one of the fastest runners in the county, rushed for 389 yards and six scores and had 14 tackles. JaQuann Carroll will play at RB, WR, DB and kick returner. WR Cole Miller could be Neufeld’s main target. The OL is anchored by Jordan Mazzola, Riley Steel and Jeremy Richey. DB Isaac Scoville had 44 tackles and DB Joseph Esqueda had 37. DL Darryl Zaide figures to be a major contributor. Nick McAllister will handle all the kicking duties.

Players to watch: QB Jack Tuttle is among the best in the country, advancing to the National Elite 11 in Oregon this summer. Committed to Utah, he was hamstrung last season by the lack of a big-play receiver. That changes this season with the addition of Chris Olave, a top-flight, three-sport athlete who is being recruited by San Diego State, Utah, Arizona, Washington State, Boston College and BYU among others.

At a glance: The Grizzlies return 10 starters from last year. In addition to Tuttle, the offense returns OL Nate Becerra and Gabe Cruz. Damon Wigand moves to RB for Sam Dixon, who will lead the defense from his LB spot. The defense could feature three bothers — senior twins Bryan and Adam Barraza at DB and LB and sophomore Nathan at DB. Maurice Jones and Max Milner return in the secondary. Isaac Anderson, a first-team all-leaguer, anchors the DL.

Players to watch: OL-DL Donovan Laie will be a factor on both sides of the ball. The 3-star recruit has drawn interest from virtually every big college program on the West Coast. WR-DB Armand Fesili will work as a slot receiver on offense, but is a major force on defense with 105 tackles last season.

At a glance: The OL is huge, averaging 281 pounds across the front, led by returnees Laie, Mason Buczek and Isaiah Kaleopa-Tuisee. Alex Miller steps in as the starting QB and bruising Jonathan Segi is the new RB. WRs Kyrin Beachem and Jordan Duson have experience. The defense returns five starters and six players with experience, led by Fesili. LB Segi had 56 tackles and DT Buczek 35. Mikah Linnan had 74 tackles and 3 sacks. The coaches expect big things from P-PK Lucas Soelberg.

Players to watch: WR Kyle Philips caught 65 passes for 909 yards and 11 TDs last season and has committed to UCLA. RB-LB Josh Bornes had 492 yards running and receiving, but it was on defense where he stood out with 136 tackles and 61/2 sacks. And he averaged 49.8 yards on 13 punts. He has committed to San Diego State.

Players to watch: Two-way starter TE-LB Louie Bickett has received offers from Navy, Brown, Columbia, Idaho and Idaho State. RB Sully O’Brien will be counted on to add some punch for the Falcons. He averaged 6.2 yards on 116 carries last year and added 133 yards on seven pass receptions.

At a glance: Torrey Pines’ wing-T offense revolves around ballhandling at quarterback. Jason Heine, who got some time behind center last year as a sophomore, takes over at QB. He’s joined in the backfield by O’Brien, Beau Morgans and baseball standout Mac Bingham. Brian Driscoll, Jacob Raab and Michael Perrone return to anchor the offensive line. DT Perrone, OLB Morgans and ILB Bickett are defensive returnees along with DE Jack Nelson and DB Peter Nelson. O’Brien, Perrone and Raab are all receiving early-season scholarship offers.