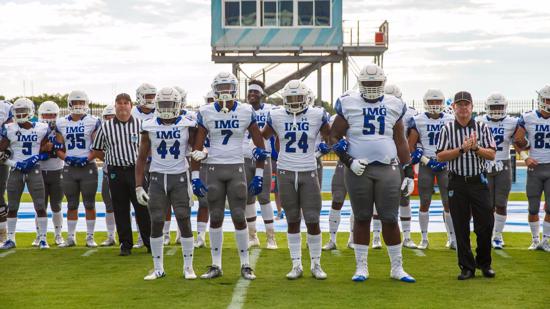 It’s a school unlike any other.

Located in Bradenton, Fla., IMG Academy is one of about 400 high school boarding schools across the country.

On Saturday, the IMG Academy football team — ranked No. 1 in the nation on the MaxPreps Freeman Rankings, No. 2 by USA Today and No. 3 on the MaxPreps Excellent 25 — plays Corona Centennial in the finale of an Honor Bowl tripleheader, an event that is presented by the San Francisco 49ers.

That game kicks off at 7:30 p.m. at Cathedral Catholic High following Helix-Lancaster Paraclete at noon and Hawaii Punahou-Gardena Serra at 4 p.m.

IMG, which traveled to Arizona last week and beat then-No. 7 nationally ranked Chandler in the desert heat, has players from 27 states and 12 countries.

Beyond that, IMG has 18 seniors and four juniors who have committed to colleges. There are 12 IMG players on the ESPN Top 300.

“We have a lot of good players. So we want to measure ourselves against top teams.”

IMG and Corona Centennial met last season when the Honor Bowl was played at Mission Viejo High. IMG squeaked out a 50-49 win.

“That was an epic game, and I hope this one is too,” said Centennial coach Matt Logan. “Man-for-man, IMG is the best team in the country. Their defensive front four is amazing, but we’ll try to run and throw on them, mix it up.”

“Absolutely, this is an opportunity to play one of the best teams in the country.”

Centennial, which beat Pittsburg 63-21 last week, has a five-star player of its own in quarterback Tanner McKee. Receiver Manuel Allen is a four-star recruit, who has committed to Louisville.

The 6-foot-6, 220-pound McKee has narrowed his college choices to Alabama, BYU, Stanford, Texas and UCLA. He completed 203 of 280 passes for 2,522 yards and 36 TDs last season and was 26 of 44 for 374 yards and three TDs against IMG. But two of his eight interceptions came against the Ascenders.

“He has every skill a quarterback needs,” Logan said.

Centennial is ranked as high as No. 6 in the nation. The Huskies play with mostly local players.

IMG, a coed school/sports academy which has about 1,100 students, runs an international program.

“The kids want to be here,” Wright said.

“We’re very honest with families when they inquire about our school ... you have to be motivated to come to IMG. We’re very regimented. There is a daily process.

“There is a high academic standard. Each student takes five core classes a semester.

“Most all our football players take summer classes, so 25 of our 30 seniors will graduate in December so they can get to their college teams.

“We set up our school like a college program to help kids with their transition to college life.”

IMG’s daily football schedule is completely opposite from nearly every high school in the nation.

Players are up at 6 a.m. and hustle to breakfast, tape and treatment.

The interest is so high that IMG fields two teams — white and blue. Blue is the No. 1 team that travels to Arizona, California, Utah, Alabama and all over Florida.

“We’ve studied the data and it shows kids do better academically if they’re up early, followed by physical activity, then school,” Wright said.

“Honestly, this is our first year doing this, so we’ll see if the kids adapt.”

IMG was founded in 1978 as a tennis boarding academy by Nick Bollettieri. IMG purchased the academy from Bollettieri in 1987 and launched golf in 1993, soccer in 1994, basketball in 2001 and football and lacrosse in 2010 as well as cross country and track in 2013.

Since football was started, the Ascenders are 38-3 and have 61 players on Division I rosters.

“The Honor Bowl was an incredible experience last year, and I understand Cathedral is a great venue and is rolling out the red carpet for all the teams.

“We’re honored to be invited back.”

Grades: Pre-K through 12 and post-graduate