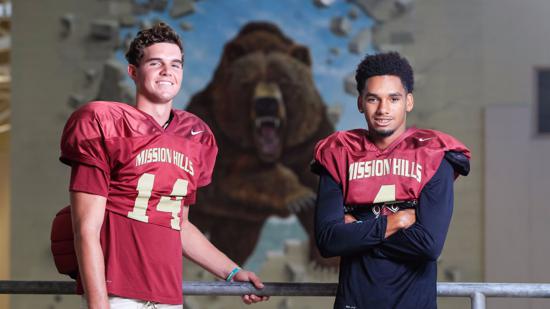 To make up for lost time, Chris Olave had to put in the time.

Along with his brother, Josh, Chris Olave was ruled ineligible last season, tripped up by a technicality that has been abolished, after transferring from Eastlake to Mission Hills.

So the Olave brothers were forced to sit and watch as the Grizzlies finished 7-5.

Very simply, the team lacked the speed the Olave brothers could have provided.

“Chris — and Josh, too — not being able to play had a big impact on us,” Tuttle said.

Based on his junior season at Eastlake and the Spanos All-Star Classic, Josh Olave earned a scholarship to Azusa Pacific, where he’s playing special teams and is a backup cornerback.

Chris Olave’s connection with Tuttle has put him on the college radar, drawing interest from Ohio State, Oregon and Cal among others.

After the season’s first two games, Mission Hills is ranked No. 1 in the county heading into tonight’s home game against Mater Dei Catholic.

To that point, Hauser singled out a play last week against Desert Hills of St. George, Utah.

The Grizzlies were in a set with three receivers on one side and Olave on the other.

Hauser wanted to bring Olave across the formation, but the defense changed its coverage.

So Tuttle and Olave made eye contact and shifted to a “go route.”

The result was a 29-yard touchdown.

“That’s exactly the kind of thing we worked on,” said Tuttle, who has committed to Utah. “For us, it’s more than just throw and catch.

“We’re best friends. We hang out. We talk. We study film. We work on timing, deep balls. I know what kind of balls he likes in certain situations.

“We have an almost telepathic connection. I can tell you at the snap what he’s thinking.”

Last season, the 6-foot-1, 170-pound Olave was thinking he couldn’t wait for this football season.

To keep his competitive fires burning, he played basketball, starting for a team that finished 22-9.

And he ran track, clocking a swift 10.82 in the 100 meters, good for fifth in the San Diego Section championships.

“After not being able to play football, I needed those sports,” Olave said. “But I needed to put in the time with Jack. I needed to look forward to this season.”

The 6-foot-4, 205-pound Tuttle was gone part of the summer as he advanced to the finals of the Elite 11 quarterback competition in Oregon against players committed to Washington State, Clemson, TCU, Virginia Tech, UCLA, North Carolina, North Carolina State and Kentucky.

Tuttle’s scouting report came back saying he “illustrated rare ability to replicate his delivery and routine from snap to snap. Not surprisingly, Tuttle hit on far more throws than he missed.”

Asked about his experience in Oregon, Tuttle said, “The competition was fierce. It was good to soak in all the coaching tips. It was great to get to know the other guys. But Chris should have been there.”

The Mission Hills coaches are doing everything they can to help Olave make up for lost time after missing his junior season.

Part of that was reshaping his body.

“He didn’t know how to lift weights when he got here,” Hauser said. “He just picked them up and started pumping.

“We showed him the right techniques, the correct sequences. And it has paid off. He’s bigger, stronger and faster. Certainly he has speed, but he has the vertical jump and hand strength now to make plays.”

The Grizzlies have outscored their first two opponents — Paramount and Desert Hills — 83-21. So the team is more than just Tuttle-to-Olave.

And Tuttle is wary about being ranked No. 1.

“Like every team in the county, our goal when we started practice was to go 15-0.”

If that’s going to happen, the Tuttle-to-Olave connection will have to keep clicking.

“I’ve been thinking about this for two years,” Olave said. “Other people might be surprised at what we’re doing. But we aren’t.”