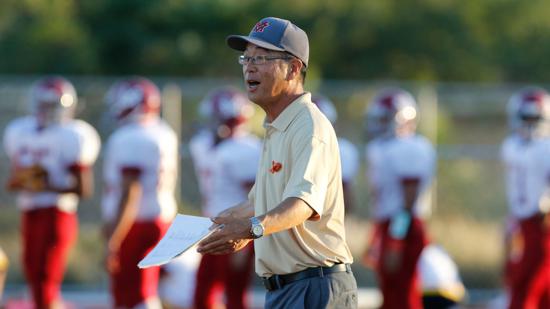 Monte Vista coach Ron Hamamoto prior to their game against Kearny. -- Photo by Don Boomer

In the late summer of 1972, a 5-foot-8, 135-pound ninth-grader told his parents he was trying out for East Union’s freshman football team in Manteca, 15 miles south of Stockton. Ron Hamamoto had never played a down of football.

“You?” said Hamamoto’s Japanese parents. “At your size?”

The teenager did not veer. Actually, he did veer. Hamamoto eventually became the Lancers’ varsity wishbone and veer option quarterback, deftly riding the fullback one play, cutting to daylight the next, pitching when defenders converged upon him in anger.

Thus, did the son of a walnut and vegetable farmer begin his fixation with football.

Hamamoto is 59 years old now, in his sixth season at Monte High. He is in his 32nd season as a San Diego Section high school varsity football coach, the longest tenure among active coaches. His record is 211-142-4, making him the eighth winningest coach in section history.

Hamamoto’s personality is self-deprecating. Regarding his divorced marital status, Hamamoto joked, “That’s probably one reason I can coach. I don’t have a wife nagging me to come home.”

His coaching style is contrarian. While the spread offense is the bomb, passes flying left and right, Hamamoto throws the ball about every lunar eclipse. Last season, Monarchs quarterbacks completed three passes. They suffered five interceptions.

But sophomore running back Jahmon McClendon rushed for 1,566 yards and scored 21 TDs, and Monte Vista advanced to the Division IV semifinals.

“You don’t get 1 minute, 8 seconds away from the finals without having a pretty good offense,” said Hamamoto, whose 1-1 team was scheduled to play Patrick Henry on Friday night.

With 26 players on his roster, Hamamoto says no to the no-huddle.

“If you’ve got 26 kids and you’re running the no-huddle, trying to run 100 plays, you can’t make it through a season,” said Hamamoto. “That’s insanity.”

Yet at a previous stop at , when his roster stretched to 50-plus players, Hamamoto once pressed the pedal and ran 96 plays in a game.

Hamamoto refuses to report statistics to a national Internet site because he doesn’t want rival coaches to click a few computer keys and identify his top players. (As if film study doesn’t do the same.)

Sitting in a classroom next to where the Monarchs toil lifting weights, Hamamoto, a physical education teacher, said, “I’m going to make them do their work.”

In short, Hamamoto adheres to the philosophy he gleaned from Al Baldock, the late longtime football coach at Taft Community College.

“His whole thing,” said Hamamoto, “was dare to be different. How much more different can you get than a skinny little Japanese boy being a head football coach for this many years, winning this many games?”

Hamamoto grew up on 22 acres in Manteca. His father served time at a Japanese internment camp in Gila Bend, Ariz., during World War II. His mother worked for an insurance company. When it was time to harvest the walnuts, Hamamoto hoisted 40-pound burlap sacks onto trucks. The family was far from wealthy.

“Probably lower middle class,” Hamamoto said. “But my dad always made sure I had a glove, a bat, cleats, a football or basketball. I had everything I needed.”

After 11 years at RB, it was off to inner-city Lincoln for four years, then a one-year stint as defensive coordinator at Mesa College and now he’s in his sixth season at Monte Vista in Spring Valley.

He has won one section championship, in 1994 at Uni. He lost championship appearances with Rancho Bernardo, Lincoln and Monte Vista.

Asked how students have changed in three decades, Hamamoto said, “Kids are kids. It doesn’t matter where they come from, what color their skin is, what their religion is. What matters is all kids want discipline and want to win.”

McClendon, who opened his junior season this year with 381 yards rushing and six TDs in two games, played varsity as a freshman. Lining up at defensive back, he was beaten for a TD early that season. McClendon recalls Hamamoto pulling him aside, not yelling but coaching and consoling him.

“He took me down the gentle route,” said McClendon, who at 6-2, 210 pounds figures to be heavily recruited.

“He’s quiet,” Schmidt said. “He’s got his hat on, his glasses. You don’t now what he’s thinking. He’s traditional. We just cram the ball down opponents’ throats, and I like that.”

As for the impact he wants to have on students, Hamamoto talks about “the whole package.”

“I want to play with class, play with sportsmanship,” he said. “If we get way up, I’m not going to run (the score) up. If we get way behind, we’re going to keep playing until the fourth quarter ends. Lou Holtz said, ‘Do what’s right.’ That’s the main thing.”

After a recent game, Hamamoto was approached by a collection of former players. Some were about to join the military.

“They shook my hand, said football was important to them,” said Hamamoto. “That tells me we’re doing the right thing. If we were nothing but (jerks) and only cared about winning, they wouldn’t come back to talk to us.”