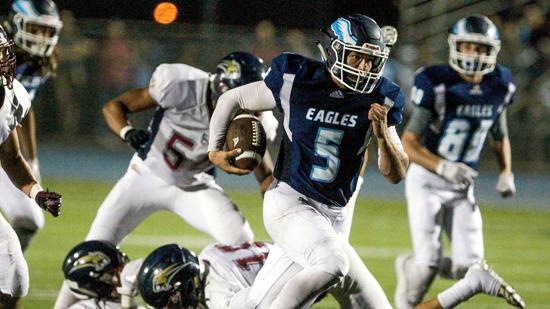 Granite Hills senior tight end Will Burton caught a 10-yard touchdown pass in the back of the end zone with 2.9 seconds to play as host Granite Hills beat Steele Canyon 43-41 on Friday night.

The thrilling ending was especially sweet for a Granite Hills (2-1) team that led 28-7 early before falling behind with 1:06 to play. But an 80-yard touchdown drive sealed the win and gave the Eagles just their third victory over their East County rivals in 13 matchups since 2004. Yet it was their third win in the last four games between the teams.

Granite Hills quarterback Jacob Siegfried led the winning drive with his arm and legs just as he had all game, converting a fourth down on a long run and throwing the winning touchdown pass as he finished the night throwing for three scores and running for three more.

In leading his team to the win, Siegfried outdueled Thomas Fishburne, who threw for four touchdowns and ran for two more to lead Steele Canyon (1-2). All four of his scoring throws went to Jordan Anderson, including a 67-yarder that looked to be the game winner for the Cougars.

But Burton, who scored the game’s first touchdown on a 65-yard catch and run, battled a defender to snatch the winning score.

“That feeling was indescribable,” Burton said. “It was incredible.”

Riggins is a freelance writer.