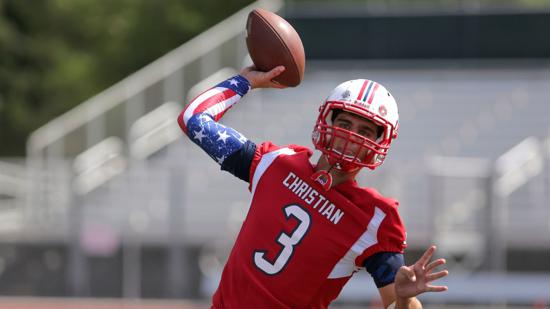 You walk into Brad Jeremiah’s spacious backyard and expect to see a tire hanging from a tree, a bucket of footballs maybe two first downs in the distance. Throw the ball through the swinging tire, the old test of a quarterback’s accuracy.

There is no tire, but far off in the distance, at least 50 yards from the patio, rests a trampoline, the sides protected by tall netting. Jeremiah, a 6-foot-5 senior quarterback at Christian High, often steps into his backyard, arching long spirals over a tree and beyond the pool with the deflated pink flamingo. He tries to drop touchdowns between the trampoline netting, banging a pole in the middle.

If only the pole echoed a ding, signaling a TD.

If Pennsylvania is the cradle of quarterbacks — Montana/Unitas/Marino/Namath — tiny Christian High, enrollment 395, is the Land of Flinging Jeremiahs. Brad is the fourth Jeremiah to walk the hallways and quarterback the football team.

“Playing with the last name at that school,” said Daniel, “there’s some pressure.”

Or as KUSI’s Brandon Stone often intones about Brad on the “Prep Pigskin Report” — “Grandson of the preacher man!”

He’s completed 84 of 110 passes (76.4 percent) for 1,265 yards. He’s tossed 17 touchdowns against one interception, the pick a deflection off a receiver’s hands. According to Maxpreps.com, Jeremiah ranks third in the nation in yards passing per game, first in TDs per game.

Yet back in second grade flag football, he lined up at linebacker. His first Pop Warner position: defensive tackle. By fifth grade, he was throwing the football.

“I actually kind of like the pressure,” Brad said of the quarterback lure. “It’s fun. And it’s challenging.”

He feels no heat following in the Jeremiah QB heritage.

Brad has been groomed to be a quarterback. He trains for strength and athleticism with Todd Durkin, famous for tutoring and . His quarterback coach is former San Diego State passer Cree Morris.

Like the time Morris told Brad to keep his left, non-throwing arm up rather than dropping it, which causes passes to flutter high and wide right. When Brad continued dropping his arm, Morris kept a promise and taped his left arm high to the body.

“He didn’t miss a single pass after that,” said Morris.

At 200 pounds, Jeremiah is not fleet afoot. He won’t run the read-option in college. But a quarterback’s accuracy begins with his feet and Morris has drilled Jeremiah with four- and six-step drills.

“I call it dancing,” said Morris. “He’s worked so hard on his footwork, his mechanics, just how he moves. His arm strength is excellent. He’s a hard worker. He’s just a guy who gets it.”

One thing Brad is not is boisterous. During a 90-minute visit to the Jeremiah home, he yawned more than once. Ice cubes in the freezer will melt before the Christian QB.

“He is super poised,” said wide receiver Jesse Matthews. “He doesn’t let anything get him off his game.”

“He’s like Shaggy on ‘Scooby-Doo,’” said Morris. “Mellow. Half the time, you don’t know what he’s thinking.”

If there’s a knock on Jeremiah, it’s something he can’t control: lack of competition. Christian has outscored its three opponents 170-51. That will change later when Lincoln, Morse and Point Loma show up on the schedule, followed by the playoffs.

Jeremiah’s young in his class, not turning 18 until next June.

“He hasn’t scraped the surface yet,” said Daniel Jeremiah. “His best is way ahead of him.”

As of yet, no college has offered a scholarship.

“You can’t be leading the nation and not have somebody interested,” said Christian head coach Matt Oliver.

Offered Morris, “All it takes is one school to fall in love with you.”

Sitting in his living room, the “NFL RedZone” on TV in the background, Jeremiah said the lack of an offer bothers him “a little bit.”

But he treats it like a blitz. Just an annoyance, something to overcome. Good luck rattling him.

“I’ve got to keep working hard,” he said, “and hopefully it’ll come.”