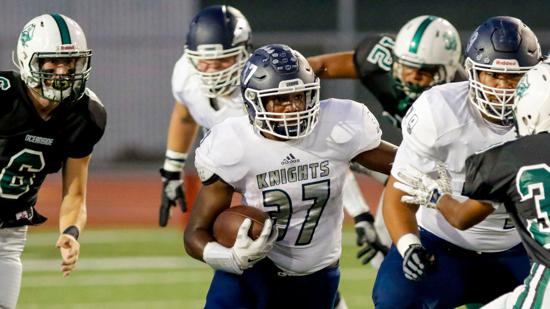 The last thing the head coaches in one of Friday night's openers in the toughest league in the San Diego Section, AKA the Avocado League, wanted their players to do was get too high for one game, too excited over a win or down after a loss.

It will be difficult for San Marcos, which came back in the second half to beat Oceanside 17-13 behind unlikely heroes Ethan Cline and Caleb Mancini, to curb its collective enthusiasm.

Oceanside High's Kyrin Beachem had an epic game, playing quarterback, running back, receiver and safety, rushed for 171 yards on 14 carries and caught a 70-yard scoring pass from Alex Miller for a 7-0 lead in the first quarter.

But the Knights rallied.

Just 15 seconds after the Pirates had taken a third-quarter lead, Cline returned the ensuing kickoff 84 yards for a San Marcos touchdown and Mancini kicked the winning PAT. Cline then scooped up a fumble and returned it 25 yards to help set up a fourth-quarter field goal.

Oceanside coach David Rodriguez must regroup with his players and get ready for No. 1-ranked Mission Hills on the road next week.

"(Carlsbad coach) Thad MacNeal had it right," Rodriguez said. “This league is a monster, No. 1 through No. 8. It's bare-knuckle boxing every week. You get too high or too low and you're going to pay for it."

Saxe is a freelance writer.