RBV, Richardson jump on Escondido early, then hold on 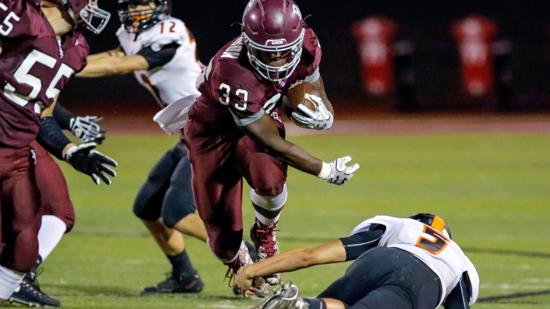 A sack by Ian McNary followed by Isaiah Moore-Mo's interception with 2 seconds remaining allowed the Longhorns to escape the Cougars and advance to 4-1 on the season.

Richardson put RBV on top with 9:01 remaining in the first quarter. He broke off a 14-yard run on the Longhorns' second play from scrimmage then, on the next play was off and running on a 41-yard race to the end zone.

Richardson ran in the two-point conversion after a penalty and RBV led 8-0.

That remained the score until the snap on an RBV attempt went awry. Holder Scott Meyer, son of coach Joe Meyer, alertly scooped up the ball and threw a 4-yard touchdown pass to Quintin Burton in a crowd in the right corner of the end zone just before halftime.

Arturo Arrreguin's PAT made it 15-0 at halftime.

With RBV leading by 15, Escondido’s Ramos hooked up with Quinten Gambet on an 80-yard pass play to set up his own 1 yard quarterback sneak and Luis Flores kicked the PAT to pull the Cougars back to within 15-7. He then brought Escondido back again and Flores' field goal made it 15-10.

But Allison Allipule intercepted a pass to halt another Escondido threat. And after the Cougars got the ball back McNary and Moore-Mo finished off the visitors.

"I knew we had a good one in Dorian Richardson," Joe Meyer said. "He's played together with my son since they were freshmen and we just had to get the right tools in front of him on the offensive line. And we've done that.

Escondido's star running back Kevin Rodriguez got up gimping due to an apparent ankle tweak on his first carry of the night but returned to the game and managed to rush for 70 yards on 12 carries.

Saxe is a freelance writer.