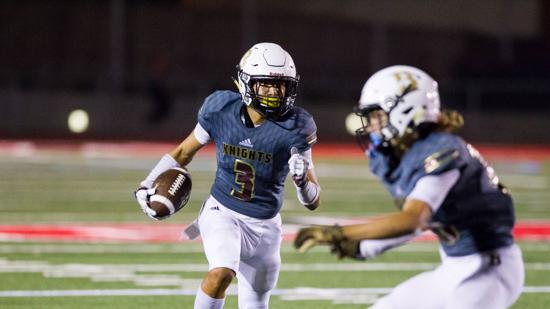 Mozes Mooney admitted it. When he woke up Friday morning, he thought of the section career receiving yardage record.

“Early in the morning I thought about it, but as the game got closer, I was focused on the game plan,” said the senior wide receiver whose 59-yard touchdown catch in the second quarter against Mission Bay pushed him past the 3,195 yards La Jolla Country Day’s Brennan Goring recorded from 2013-2016.

That grab was Mooney’s seventh of the half for 134 yards, giving him 3,233 yards in his career with at least four games remaining.

He had two touchdowns in the 60-0 running-time rout of the Buccaneers, increasing his record in that category to 58. His seven grabs pushed his third all-time section mark to 238.

The number he enjoyed most was five, as in the seventh-ranked Knights improving to 5-0 on the season against the Bucs (0-5) at Gene Edwards Stadium.

“If records happen, they happen,” said Mooney. “We wanted to be in playoff form by midseason and we’re close. There’s no looking back, no ‘I wish I’d done this or that.’ ”

Mooney wasn’t the only standout for the Knights as senior quarterback Jeffrey Jackson completed 15 of 21 passes for 174 yards and four TDs.

The defense was just as impressive. Led by another freshman, Champion Johnson, the Knights collected eight first-half sacks, limiting Mission Bay to a negative 62 yards rushing and one yard passing.

Brand is a freelance writer.