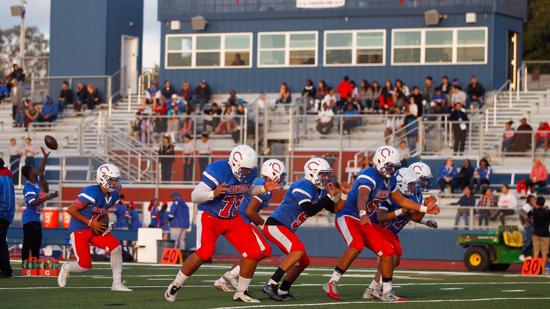 Michael Wright remembers all too well the abrasions and twisted ankles his football players sustained over the years because Crawford played on one of the worst fields in the county. He also remembers the gophers, the sparse crowds and sometimes the mocking his players endured from opposing teams.

“It was embarrassing,” the Crawford coach said. “It was grass, dirt or hay.”

The facility was awful, and the baseball field was even worse — without dugout shade and a right-field fence about 240 feet away from home plate in which balls hit over it were ruled doubles.

On Friday night, Crawford and played in the Colts’ new seven-acre football stadium, complete with an eye-catching synthetic turf field. A new baseball stadium also was recently completed for a combined bill of around $15 million — made possible by bond measures approved by voters for the San Diego school district.

A new softball stadium, tennis facility and a three-story classroom building are in the works for another $8.3 million.

Wisely, school officials decided to build the football stadium where the baseball field used to be and vice versa. It’s a better fit, and both are spectacular facilities.

“We’re the last school in San Diego Unified to get lights and a new football stadium,” said Athletic Director Kelcie Butcher, who has worn many hats at Crawford for 17 years.

Before the game, approximately 60 alumni, some in their upper 70s, “sprinted” out of an inflatable tunnel in the south end zone. A classy ribbon-cutting ceremony followed. At the urging of Principal Richard Lawrence, the lights popped on at 6:10. Senior Vivian Thai sang a beautiful rendition of “The Star-Spangled Banner” — and more than a thousand fans erupted in joy.

Bruce Parker and Duane Farrar, both 73, were on hand to soak it all in. They were co-captains on Crawford’s only football championship — the Class 2A title in 1961, four years after the school opened in 1957 to sophomores and juniors.

“Walking into this incredible stadium,” Parker said, “I was like a kid going to Disneyland for the first time.”

Arnold Tripp, 76, was a member of Crawford’s first graduating class in 1959 and was arguably the fastest player in the state at the time. He quipped: “This is a little better than what we had.”

Crawford hadn’t hosted a football game on campus since Halloween in 2014. Its only previous night game came in 2013 with rented portable lights. The Colts won both of those. They have played “home” games at Hoover or Lincoln for four years as construction delays put the immense project behind schedule a year or more.

“It’s nice to walk to your own field rather than get on a yellow bus every week,” Wright said. “This is beautiful. The kids are extremely excited. They finally have a place to call home.”

English teacher Lou Coons (Class of ’87 and a former Crawford coach) labeled the experience as “well worth the wait. I see hundreds of alumni beaming from ear to ear with pride.”

In addition, Crawford, which has one of the most diverse student populations in the country, can use the facilities for other events, including graduation, which had been off-campus for years.

“It’s going to help the whole community,” Butcher said. “The parents no longer have to hop on a trolley to see their kids graduate from high school.”

Next week is homecoming.