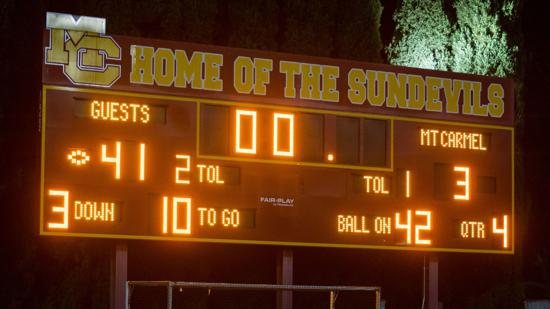 The final score and scoreboard of the Mt. Carmel Sundevils. Ramona won 41-3.

The 2017 high school football season is being defined by some as the Year of the Rout.

Of 399 games reported through last week, 123 were decided by 35 points or more. That’s 30.8 percent or nearly one out of every three games.

Stunningly, a running clock has been implemented in the first quarter of at least two San Diego Section games this season.

Not even the mighty are immune. and Cathedral Catholic, which have combined to win 26 section titles, absorbed drubbings. Mission Hills smacked the Pirates 41-3. Cathedral, coming off a 15-0 season, has been on the wrong side of 39-0 and 37-0 blankings.

Administrators, coaches, referees and players have noticed the trend.

As to why there are so many one-sided games, coaches list multiple factors — overly ambitious scheduling, transfers who disrupt the balance of power, the high number of off-campus coaches, an increase in spread offenses that are difficult for undermanned teams to defend and a widening gap between excellent programs and ones that are struggling.

“The variance between the haves and the have-nots is greater,” said former Oceanside High coach John Carroll.

There are impacts from so many clobberings. At Mission Bay, new Buccaneers coach Kenny Nears began the season with 34 players. After an 0-8 start, including losing the last four games by a combined score of 226-33, the Bucs have lost 10 players to injuries. Another five players quit.

Asked what his players’ mental state is like, Nears said, “It’s a true struggle right now.”

In a sport as physical as football, a sport that draws more media attention than any other, there can be bitter feelings when a score turns ugly.

Nears was not happy with how Christian’s coaching staff conducted itself at the end of the Patriots’ 68-12 win over Mission Bay. Nears said the Patriots yelled across the field, complaining when Mission Bay took a late timeout in an attempt to score a two-point conversion.

“You’re saying you’re Christian?” said Nears. “Where do your morals come in?”

Christian Athletic Director David Beezer, a longtime head coach and offensive coordinator at the school, said an assistant coach was let go three days after the Mission Bay game because of his actions.

“I don’t see how you can go from winning a CIF championship two years ago to this,” said first-year Barons coach .

“This” is an 0-9 season with Bonita Vista outscored 427-62 or an average of 47-7. The Barons have suffered through the perfect storm leading to a long season. With only one starter returning, Jones was saddled with a schedule that included powers San Marcos, Madison and Helix, plus perennially strong programs Point Loma, Olympian and Mater Dei.

“Our schedule is brutal,” said Jones.

There is hope for the future. The freshman team is 8-1 with wins over Helix and Madison.

“We’ve got ballers down there,” Jones said.

His varsity players, Jones said, have handled the adversity well.

“To me, they’re holding up as well as they possibly can,” said Jones, who requested a first-quarter running clock in the Barons’ 56-6 loss to Madison. “They knew what they were up against. They get it. We were up against extenuating circumstances. Kids are still coming to practice. We’ll be all right.”

At Mission Bay, Nears faced the challenge of replacing longtime coach Willie Matson. That task was exacerbated when running back Kenyon Sims and linebacker/tight end Charles Hicks transferred to Lincoln.

Sims and Hicks have committed to Division I programs, Sims to Utah and Hicks to Wyoming.

Regarding players transferring to stronger programs, former Helix coach Troy Starr said, “They’re smart. Their parents are smart. They put kids in a situation they think will help them.”

Multiple coaches cited the increase of off-campus coaches leading to those programs being at a disadvantage.

“They’re not around the players as much,” Starr said. “They’re simply not qualified for the most part. They just don’t have the coaching background.”

In his 26 years at Oceanside, John Carroll won 248 games, 13 section titles and two state championships. Carroll’s Pirates administered their share of routs and he developed a game plan for those nights.

First, he played the first half all out, keeping starters in, wanting to keep his team sharp.

“In the third quarter,” Carroll said, “we were going to shut it down. We didn’t want to score. I never, ever wanted to humiliate an opponent.”

Carroll agreed to early running clocks and emptied his bench.

“The third part, to be totally honest with you,” said Carroll, “I’d tell officials to flag us, to slow us down if necessary, without taking away from our backups’ opportunity to be successful.”

St. Augustine coach Richard Sanchez didn’t call pass plays in the second half of the Saints’ 56-15 win over Mission Bay and instructed his quarterback to take a knee on multiple plays.

But some teams carry a reputation of not being so kind. Since 2014, Bishop’s has won 23 of its 49 games by 35 or more points. In that same period, Christian has won 35 percent of its game by 35-plus points.

Both programs have been criticized by coaches for running up scores.

Bishop’s coach Joel Allen said he feels he has erred sometimes in the past, not always doing all he could to keep scores down.

Now, he said, he sometimes tells assistants, “Don’t let it get to this (lopsided) score.”

Said Monte Vista’s Ron Hamamoto, the dean of active coaches in his 32nd season as a head coach, “This is a profession where if I ran up the score on somebody, how do kids on the other sideline feel? That’s not building any self-esteem which, to me, is what the game is all about.”

In a sport suffering declining participation, Bishop’s and Christian carry small rosters. Bishop’s, which does not field a JV, suits up about 32 players, eight of whom are freshmen. There aren’t many backups.

The Knights’ backup quarterback, freshman Tyler Buchner, is expected to be one of the section’s most recruited players in three years. There’s not much, if any, dropoff when he enters a game.

“You have to respect the other team by still playing,” Allen said.

The routs and running clocks are a growing trend, one that both puzzles and frustrates coaches. Said Allen, “I hate these scores. I wish they weren’t the case.”