Coach finds oasis in the desert 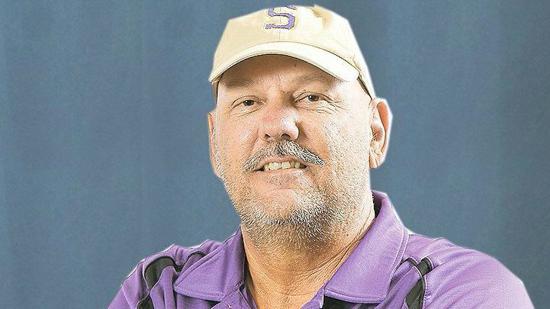 John Mitosinka is an alfalfa farmer who played one year of freshman football 41 years ago. He is also a manager for an agricultural company specializing in seeds and frequently traverses the Southwest from Yuma, Ariz., to Tulare in Central California — sometimes even New Mexico, which he toured two weeks ago.

He was a baseball player at Imperial Valley College a long time ago. At 6-feet-5, he was more of a recreation basketball player and now at 56 nurses sore knees on a daily basis.

His backyard is the third hole on one of the most prestigious golf courses in the country, PGA West in La Quinta. He plays it often but never has to pay.

Though he didn’t start coaching football until age 38, Mitosinka is now the head coach at Southwest High in El Centro, a team that is 11-0 for the first time in school history (it opened in 1996) and a serious threat to win the San Diego Section Division III championship.

The top-seeded Eagles play host to No. 4 Hilltop on Friday in the semifinals. Hilltop advanced with a 36-35 win over Imperial, a team Southwest beat 34-6.

“I barely played high school football, but I was a student of the game,” Mitosinka said. “I watched it on TV every chance I had. I watched Dan Fouts and Don Coryell. I read books — just studying the game. That’s how I learned how to do it.

“Plus, I worked under some really good coaches. I learned to listen to what other people had to say. Listen and find out what’s going to help you out in your coaching career.”

Southwest won its first outright Imperial Valley League championship this year, beating Brawley, Imperial and Central in the same season for the first time. Before beating Mount Miguel 39-21 in the quarterfinals on Friday, the Eagles had outscored opponents 425-48 with five shutouts.

Saikhon, who has committed to UC Davis, has rushed for 1,345 yards and 21 touchdowns and is the leading receiver with 28 catches for 550 yards and eight TDs. Cordova has 563 rushing yards and four TDs. Jungers has thrown for 1,463 yards and 18 TDs and rushed for 342 yards and five scores.

Saikhon (40 tackles, three interceptions) and Jungers (45, 2) also play defense. Saikhon is the defending section track champion in the 300-meter hurdles and had the fastest time among juniors in the 110-meter hurdles at the state finals in June.

Southwest has seven three-year starters and a large group of players who have played together for years, including top lineman Jonathan Puga, who goes only 5-11, 185 pounds. Linebackers Israel Zermeno and Trey McAllister lead the club with 118 and 103 tackles, respectively. McAllister is Mitosinka’s nephew.

“We’re all puzzle pieces, and we all fit together,” Puga said. “It feels perfect to us.”

Mitosinka went to grammar school and high school with Saikhon’s mother, Karen, and graduated from Central in 1979. He has known the family tree for 40-something years and has deep ties in the Valley community.

Mitosinka, who earned a degree in agricultural business management from Cal Poly Pomona and is recognizable on the Eagles’ sidelines with his coveted Redwing boots, didn’t start coaching football until his son, John Michael, 27, urged him to help his Pop Warner team.

“He actually played more years of football than I ever did,” said Mitosinka, who was a lanky 6-5, 180-pound athlete in high school. Mitosinka loved playing quarterback but was an offensive lineman in his one and only high school season.

“You look back, you always wonder, ‘Gosh, darn, why didn’t I play football?’” he said. “I was a big guy, but I loved baseball.”

Moving on from Pop Warner, Mitosinka coached JV football at Yuma Catholic for six years and then was the defensive coordinator at Southwest from 2008-10 before retiring from coaching. That lasted two years.

Keep in mind, Mitosinka lives 90 miles from Southwest and has a challenging job that requires a lot of attention and travel time.

“I was done,” he said, “but then I got a call from (then Southwest coach) Joe Conner a couple years later.”

Conned or coerced, Mitosinka re-enlisted at Southwest in 2013 and seven games into the season became the interim head coach when Conner resigned. The Eagles won a playoff game that year and Mitosinka has been the head coach ever since. Southwest was 4-7 in his first full season and then posted consecutive 9-3 seasons before this year’s magical ride.

“He’s an awesome guy,” Saikhon said. “He guides us in the right direction. He’s not just a great football coach, he cares about what we do after football.

“We have such great chemistry on this team. We have each other’s backs every Friday night.”

To wit, Mitosinka said, “There are so many kids I feel really close to on this team. It feels like they’re all my kids. Love them all.”