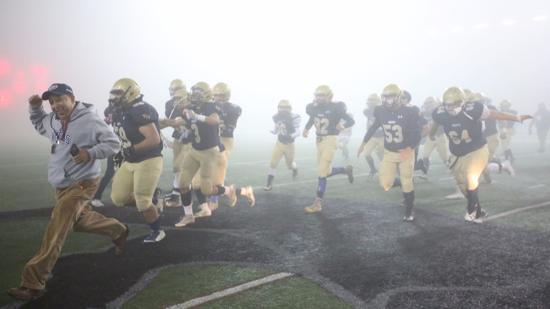 The high school football playoffs are nothing new for Vincent Memorial. However, every time the Scots took the drive to San Diego from Calexico they ran into a giant roadblock.

In the 2014 Division IV championship, the Scots ran headlong into Country Day and quarterback Braxton Burmeister.

And if it wasn’t Country Day, the Scots also had Santa Fe Christian and Horizon Christian blocking the road.

On Saturday night, Vincent Memorial played a good but not dominating Crawford team in the Division V championship and drove past the Colts 45-3 on a night so foggy at Southwestern College that seeing the field in the second half was nearly impossible.

The victory gives the Scots their first San Diego Section football title, moves them to 11-2 and into the Southern California playoffs, probably in Division 6A against either Santa Maria or Big Bear.

Crawford, which suits up only 24 players, lost quarterback Shawn Balala to an injury late in the second quarter. He didn’t return, with Matthew Clark taking over at quarterback.

The versatile Ali Musa was hurt one play before Balala. Musa missed the rest of the first half, but even his return in the third quarter couldn’t stop the Vincent Memorial runaway.

The Scots had 10 quarterback sacks, including two each by Manuel Diaz, Gabriel Lopez, Juan Pablo Robinson and Emiliano Cueva.

“Crawford is one of the most-athletic teams we’ve played, but we studied video very carefully during the week and executed our game plan,” Diaz said. “Our defensive line was off the charts.

“They helped us make history.”

Vincent Memorial has been playing varsity football for 18 years.

The Scots held Crawford to 9 yards rushing on 26 attempts. Of those 26, 16 went for zero or lost yardage.

The Colts had 102 yards passing.

“We’ve worked so hard for this,” said Vincent Memorial running back Daniel Rizzo, who scored a pair of touchdowns. “We’re from Calexico, so no one knows us. But we train hard. The coaches prepare us for every game.

“Winning this and having a chance to win a state title is amazing.”