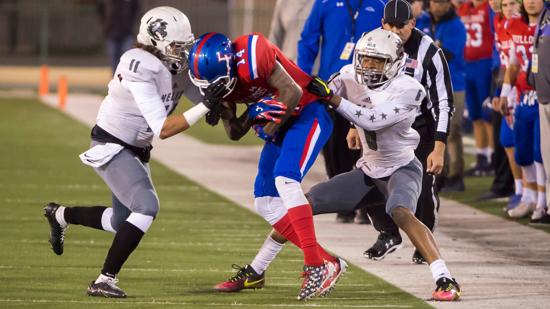 A 6-foot, 175-pound junior, Bennett dazzled the Highlanders with his right arm and legs Friday night. Bennett passed for 327 yards, rushed for 147 and accounted for six touchdowns as Folsom defeated Helix 49-42 in the State Championship Division 1-AA bowl game at Sacramento State.

The Bulldogs completed a 16-0 season, winning their third state championship. Helix finished 13-2 and is now 1-1 in state title games.

“First of all, he was a really humble player. He didn’t say anything,” Helix center/defensive tackle Mathew Avi’i said of Bennett. “He’s just one heckuva a player, and I really respect him.”

After traveling 13 hours by bus Thursday, then mainly sitting around the hotel all day Friday, Helix could not have started better. On the second play from scrimmage, 290-pound defensive lineman Robert Hunter picked off a deflected pass at the Folsom 17, then rumbled 13 yards to the 4.

After stopping Folsom on downs, quarterback Carson Baker arched a pass to Wooden deep down the left sideline. Wooden leaped for the catch, tip-toed along the boundary and sped off for a 73-yard TD.

Folsom, though, has averaged 48 points thanks to a blink-and-they’re-in-the-end-zone offense. The Bulldogs scored 28 unanswered points faster than you can say Kaiden Bennett.

“He dominated,” said Helix head coach Robbie Owens. “I think he was probably a better passer than I thought.”

First Bennett connected with Elijhah Badger on a spectacular touchdown. Badger wrestled away from Isaac Taylor-Stuart’s attempted sideline tackle, then sped down the boundary for a “SportsCenter” highlight 70-yard TD.

In succession, Bennett connected for a 49-yard scoring strike aided by another missed tackle, then a TD pass from 4 yards. He then showcased his feet, scoring on a 32-yard run to give Folsom a 28-14 halftime lead.

“We just did not tackle well,” said Owens. “I think we won the first, third and fourth quarters. But the second quarter, we let it get away with our missed tackles.”

The Highlanders proved white hot offensively in the second half, but simply could not stop Folsom. A 47-yard Baker to Rashad Scott TD pass made it 28-21.

In his final high school football game, Baker turned in a gritty effort against a steady pass rush. The UC Davis commit completed 19 of 31 passes for 322 yards and 3 TDs. He also scored on an 8-yard run.

As you would expect, he was emotional after the game, walking along the railing that separated fans from players, accepting consolatory hugs.

“I’m just sad it’s over,” he said. “I gave it my all to the program. I’ll miss the people. My teammates, my coaches. I’m going to miss them.”

As he has done throughout the playoffs, sophomore Elelyon “Fatto” Noa handled the ground game, gaining 124 yards on 28 carries. In five playoff games he rushed for 1,013 yards.

Baker hit Terrance McIntyre with a 3-yard TD pass with 1:06 to play, cutting the lead to 49-42. But Folsom recovered an onside kick and ran out the clock.

“I’m a little disappointed, but I’m also happy,” Avi’i said before walking off the field. “The season was a blessing. I thank God we got through it with only a few injuries.

“The thing that I’ll take away the most is the brotherhood that we developed. We’re a family. We care for one another.”