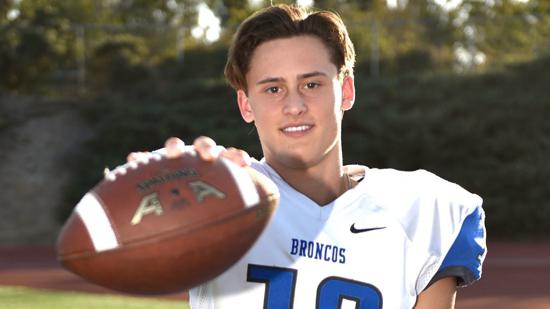 As the moments were winding down before Matt Araiza would sign his national letter of intent with San Diego State, his parents walked in wearing new Aztecs gear for the occasion.

“I’d never seen that gear before,’’ Araiza said. “I was going to go out after signing and get some of that same gear for Christmas. Now I’ve got to do some more Christmas shopping.’’

But the 6-foot-2 place-kicker at Rancho Bernardo won’t be shopping around for a college after he accepted a full scholarship to kick at Montezuma Mesa.

The San Diego Section’s three-time kicker of the year sifted through five potential schools before deciding on taking the offer to stay close to home.

As tempting as some of other schools were, most were not offering scholarships but a chance to walk-on for a year.

“Being close to home was great, but when San Diego State offered a full scholarship I accepted,’’ Araiza said. “My mom started crying when I told her my decision because I’ll be at her alma mater.

“It’s been a dream my whole life to kick in college and now it’s about to become reality.’’

Araiza will arrive with a pretty impressive resume, including 15 field goals this past season and a section-record 18 field goals during the Broncos’ run to the Division III-A state championship in 2015.

His longest kick ever was a 53-yarder.

“All he’s done for us is prove he can kick, kick in big games, be an All-American kicker for three years in a row,’’ Broncos coach Tristan McCoy said. “Matt became a weapon. I never understood how valuable a kicker can be until Matt.

“In our CIF Finals against Mt. Carmel (2015) he punted from our own 20 and they started their drive inside their own 10.

During the 2017 season, Araiza also played cornerback, collecting 15 tackles, an interception and a fumble recovery.

During his three seasons, he kicked off 221 times and 179 of them were never returned.

“The coaches were joking that the staff will have to get back and start coaching the kickoff team again because Matt won’t be here to automatically kick it into the end zone every time,’’ joked McCoy.

Araiza is also playing forward on the Broncos’ boys soccer team this winter.

“I love to compete,’’ Araiza said. “Sometimes on corner kicks I feel like a wide receiver trying to get away from a DB.

“It’s crazy in front of the net. Every time I have someone trying to grab me.’’

He felt just the opposite for a while during the recruiting process. Most colleges take their time with kickers, relegating their recruiting to the last minute.

“Kickers are different, so why wouldn’t they be recruited differently,’’ added McCoy. “Matt put himself in a good spot on the field and with his grades in the classroom.’’

Thus far, Araiza is the lone Bronco to receive a football scholarship this season.

Besides being a place-kicker at San Diego State, Araiza indicated he would also try to be the punter as well.

“I can’t wait to just be a full-time kicker,’’ Araiza said. “I’ve gone to a lot of state games and now to know I’ll be there in Qualcomm in a few months is amazing.

“I need to get into the weight room to start looking more like a Division I football player. I don’t want to give up any long kickoff returns for touchdowns.’’

He still recalls a kick return sophomore year that went for a touchdown.

“I gave up a few that year,’’ Araiza recalled. “I had no clue on the first one. He went this way and that way and I hit the ground. Never touched him.

“The next day it was a really bad film session.’’

Araiza will be reunited with former Rancho Bernardo quarterback Mark Salazar, who is already at San Diego State.