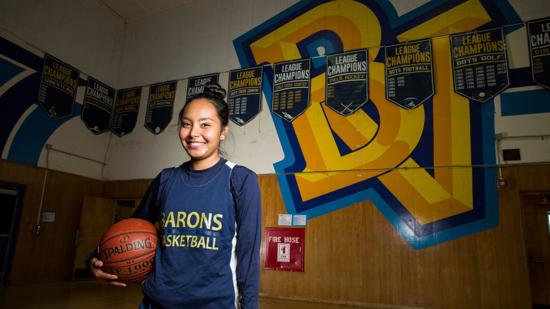 It was a single line among Friday night’s girls basketball scores.

“I honestly didn’t go into the game thinking I’d score 76,” said Latone, who has not committed to a college. “I was coming off a game of 18 points against Eastlake and I was fine with that as long as we got the dub (win).

Latone said Hilltop started out playing man-to-man defense on her but switched to a 2-3 zone to make her shoot from outside.

“I just shot over them and once my threes started falling, I knew I was going to have a good night,” said Latone, who was 20 of 28 on 2-point field goals and 10 of 20 on treys in addition to converting six of her seven free throws. She had 42 points at the half.

Coach Tristan Lamb said he saw Houston set the record and thought Latone’s performance was a little more impressive because of her 3-point field goals.

“Consider that Shyla played just one minute in the fourth quarter and we were very respectful, keeping the game under 100 points,” he said.

According to Cal-Hi Sports, the Barons’ 5-foot-4 senior scored the fourth-most points in a game in state history, but Latone is the third-best individual since Riverside Poly legend Cheryl Miller had 105- and 77-point games.

Inglewood Morningside’s Lisa Leslie scored 101 points in 1990 in the first half of a game but didn’t have a chance to break Miller’s record when South Torrance refused to come out for the second half.

PILING UP THE POINTS

Brand is a freelance writer.