Top honors for Comets of the past 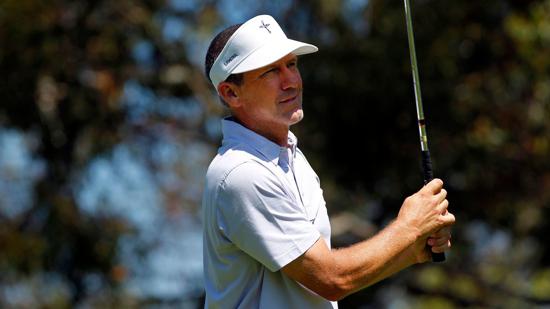 John Ashworth played 100 holes of golf at the Center City Golf Course at Goat Hill in Oceanside on Monday, July 16, 2012. Ashworth was raising money for the North County Junior Golf Association and

One of the biggest names in golf has a fitting new title: Palomar College Hall of Famer.

John Ashworth, iconic golf fashion designer, was one of 11 members inducted into the college’s Hall of Fame on Saturday at Twin Oaks Golf Course in San Marcos — the sixth such class in Palomar history.

“I was very honored with the recognition,” Ashworth said. “It hasn’t really hit me yet, but it’s a great honor.”

Ashworth, who graduated from Orange Glen High in Escondido, spent one year at Palomar, leaving in 1978 to join the golf team at the University of Arizona. However, that year was a transformative period for Ashworth, who admitted he still had some growing up to do after high school.

As a Comet under the guidance of head coach Bob Lusky, Ashworth led the golf team to its best season in history, finishing 22-2. Ashworth credited his time at Palomar with giving his life the direction it needed.

“I had a lot of great memories here,” Ashworth said. “If I look at my life, (Palomar) was a jumping-off point. Otherwise, who knows? I’ve done a lot of cool things with my life, but I don’t think I would’ve been able to have the confidence or education without getting that kick start.”

He built the Ashworth apparel brand into an empire, selling it to TaylorMade-Adidas for a reported $72 million in 2008. Since then, he’s launched Linksoul, a golf apparel company that’s a labor of love to Ashworth.

The phrase “Make Par, Not War” is a core value of the brand and the manifestation of Ashworth’s surfer-like cool.

PGA athletes Ryan Moore, Lucas Glover and Geoff Ogilvy are among those who rock Linksoul’s threads.

Following is the remainder of the Palomar College Hall of Fame’s Class of 2017:

Saladino, currently an infielder for the Chicago White Sox, graduated from Palomar in 2009 with a stellar résumé. He was a two-time all-Pacific Coast Athletic Conference shortstop for the Comets, setting a school record in his sophomore year with a .616 batting average against conference opponents.

After leading Oral Roberts University to an NCAA Division I tournament berth, Saladino was drafted by the White Sox in 2010 and made his major league debut in 2015.

Mace was a terror on the defensive line for the Comets. In his sophomore season (2004), he racked up 12 sacks and earned a scholarship to the University of Wyoming. As a Cowboy, Mace was a second-team All-Mountain West defensive end his senior year.

He spent three years with the Buffalo Bills before returning to his native Canada to spend six seasons with the Calgary Stampeders. Mace was instrumental in Calgary’s 2014 Grey Cup victory and now serves as the team’s defensive line coach.

Mitchell, who was inducted into Palomar’s Hall of Fame posthumously, was a star guard for the Comets basketball team from 1958 to 1960. He led Palomar to a South Central Conference championship under legendary head coach Joe Brennan.

After graduating from San Diego State, he enlisted in the Marine Corps. As an infantry officer and platoon leader, Mitchell, a lieutenant, was killed on combat patrol in the Vietnam War in 1965. He was the first Palomar alumnus to lose his life in combat. Mitchell’s name is at the top of Palomar College’s Veterans Memorial.

One of the most decorated aquatic athletes in Palomar College history, Horman was a star water polo player and swimmer for the Comets. Horman set the school’s water polo record for assists, and in her 2000 senior season led the team to its best record (17-3-1) in history.

As a swimmer, she was a two-time All-American, breaking three individual and three relay school records.

As a quarterback for coach Tom Craft’s football team, Barrick led the Comets to their first-ever postseason berth, a 21-20 victory over Ventura in the Hall of Fame Bowl in 1989. Barrick was a first-team J.C. Grid-Wire All-American, passing for 3,624 yards and 23 touchdowns in his only season at Palomar, following a transfer from San Diego State.

In Sanders’ two years as the star pitcher of the Comets softball team, Palomar finished a combined 41-8. In Sanders’ sophomore season of 1980, the Comets claimed the Mission Conference crown as she posted a 10-2 regular-season record and opened the playoffs with a 1-0 shutout over Cerritos.

From Palomar, Sanders accepted a scholarship to San Diego State, where her career hits-per-seven-innings figure of 4.662 still ranks third on the Aztecs’ all-time list.

Dunckel patrolled left field for Palomar in 1988 and 1989. He contributed to the Comets’ back-to-back conference championships in baseball and hit .468 his sophomore year. That mark is still Palomar’s all-time single-season record. Dunckel then went to San Diego State, where he kept hitting.

As an Aztec, Dunckel hit .330 his junior season and .332 as a senior. He signed with the California Angels, spending two years in their minor league system before an injury ended his career. Dunckel is currently the head softball coach at Valley Center High.

Quirk was a member of Palomar’s volleyball and track and field teams from 1978 to 1980 and excelled in both programs. She led the volleyball team to a conference title in both her years of competition.

As a runner, she placed in five events at the Mission Conference track and field finals her sophomore season — when she was named the conference’s track and field athlete of the year.

Fa’agata earned the California community college state player of the year award in 1993 after leading Palomar’s softball team to the Pacific Coast Conference championship. That season, the Comets finished as the runner-up in the state tournament.

In Fa’agata’s one season at Palomar, she hit for a .394 batting average and belted nine home runs. She earned a scholarship to Cal State Fullerton and later transferred back to her hometown, finishing her college career at Sonoma State.

Farley was a dominant player on both the water polo and swim teams at Palomar, where he was coached by fellow Hall of Famer Don Hubbard.

Lafferty is a freelance writer.