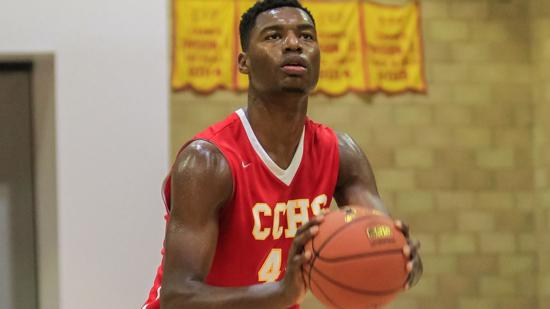 Here’s the stat that provides a lifeline to Brandon McCoy’s dream:

The 7-foot Cathedral Catholic High alum wasn’t Thursday night in the two-round, 60-pick draft held at the in Brooklyn. It’s an eventuality that was probably unimaginable when McCoy was ranked the nation’s No. 12 prep prospect in the class of 2017, or had 13 points, seven rebounds, four steals and four blocks in the 2017 McDonald’s All-American Game. Or last December, when he dropped 33 points on Arizona’s Deandre Ayton, the No. 1 pick Thursday by the .

But McCoy slid from a projected first-round prospect last fall to the second round and then completely out of it, perhaps due to his performance at combine last month in Chicago, perhaps due to the NBA’s shift away from traditional low-post centers.

That team, at least for the NBA Summer League in Las Vegas, is the Milwaukee Bucks. McCoy agreed to a free-agent contract about two hours after the draft.

McCoy came to San Diego from Chicago and lived with Manning, who became his guardian. He spent a year at Balboa City School, then two at Morse High and two at Cathedral. He spent his only college season at UNLV, where he averaged a double-double (16.9 points, 10.3 rebounds) and was named freshman of the year.

“Brandon was probably born 10 years too late,” ESPN analyst Jay Bilas told the Las Vegas Review-Journal. “In today’s game, he’s more of a low-post, back-to-the-basket guy. That’s not to say that you don’t need that at all in the NBA, but it’s not at a premium.”

As expected, San Diego State seniors Malik Pope and Trey Kell went undrafted as well. Both worked out for NBA teams throughout the spring and are candidates to land on summer league rosters.

The only player drafted from a Mountain West school was Boise State senior Chandler Hutchison, who was taken 22nd by the Chicago Bulls. Several of the league’s top players who provisionally entered the draft — SDSU’s Jalen McDaniels, and Nevada’s Caleb and Cody Martin — didn’t sign with an agent and returned to school for the 2018-19 season.