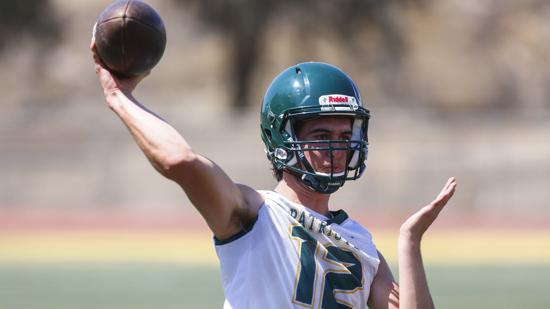 In soccer-mad Mexico, Ethan Gomez leaned toward another type of futbol, the one that’s oblong with laces.

Raised in Toluca, about 40 miles outside Mexico City, Gomez played club football since he was 6 years old. He was a quarterback and never played organized soccer.

“I want to play in the or college,” said Gomez. “I realized my best option was to play high school football (in the United States).”

So at 15, Gomez left his parents and a younger brother and sister behind, moving to to live with an aunt, barely a pooch kick from the Patrick Henry High campus. He’s 17 now, going into his senior season at Henry.

Gomez arrived in San Diego one week before his sophomore year. He walked into the school office, said he’d like to play football, and, according to Gomez, was told he would have to wait a year, that the season had already started.

He attended one game that season. His impression?

“It’s faster than the football in Mexico,” said Gomez, who stands 6-feet-1 and weighs 180 pounds. “It looks stronger. I thought it was going to be fun. I really wanted to try it.”

Gomez began last season as the Patriots’ backup quarterback. But after a Week 1 loss, he was inserted as the starter, beating out a senior who had been with the program since he was a freshman.

Henry struggled to a 3-8 record, but the biggest issue was a defense that permitted 33 points a game. An athletic quarterback who likes to run and doesn’t shy away from contact, Gomez directed an offense that averaged 20.6 points.

He completed 54 percent of his passes, throwing for 1,411 yards and eight touchdowns. He suffered seven interceptions. Gomez rushed for 414 yards and five TDs.

“He’s very athletic and throws a nice ball,” said Monte Vista coach Ron Hamamoto. “Patrick Henry is going to be very good with him at quarterback.”

Gomez is popular among teammates because he’s hard-working (he bench presses 230 pounds) and humble.

“He’s the kind of kid who’ll play with the flu, do whatever you ask him to do,” said Patrick Henry coach Mike Martinez. “He’s tough.”

“Everyone likes him,” said Patriots tight end/linebacker/safety Jacob Adelman. “He sets his nose to the grindstone. He’s a real quiet guy. He’s not a super opinionated guy, not rubbing anybody the wrong way.”

The only people Gomez may rub the wrong way are defensive backs he might run over when darting off on scrambles. He’s not the type of quarterback looking to slide on a soft piece of carpet.

“I consider myself a mobile quarterback,” said Gomez. “Sometimes I prefer running to throwing. I don’t have a great arm. I can make good throws, but I don’t have a 70-yard arm.”

Gomez said he was drawn to football because “it just made me feel free. I’m a guy who wants to hit a lot. I’m always kind of stressed. Football was a way to get rid of that.”

Gomez likes the American culture, saying people are “very friendly.” He enjoys the beach and has learned to surf. While San Diegans typically rave about the local Mexican food, he said, “I still don’t think it compares to real Mexican food.”

The most difficult part about being 1,731 miles from home is being apart from his family. Sitting on a bench on Patrick Henry’s football field, taking a brief break from practice, Gomez turned emotional when discussing his mother, father, sister and brother.

“Emotionally,” he said, “it’s really, really hard. I was raised that family is the most important thing in life. Being separated from them, it’s kind of painful.”

He talks to his family once a week and flies back when he can.

Of his parents, who are lawyers, he said, “They’re doing what they can to keep me here, helping me chase my dream. I do it for them.”

“The way he moves,” said Gomez, describing what he likes about Rodgers. “He’s calm all day.”

Gomez is a good student, with a GPA near 3.6. He longs to play college football.

He attended camps near Los Angeles this summer, hoping to attract the attention of college coaches.

In the meantime, he will be the man behind center for Henry this fall, taking snaps in the shotgun formation. Martinez said he might ask his quarterback to play a few snaps at safety.

“That’s the kind of athlete he is,” said Martinez.

“If the coaches need me to play safety or any other position, I’m open,” said Gomez. “I want to help the team any way I can. If that’s playing safety or tackle, I’m grateful to do it.”