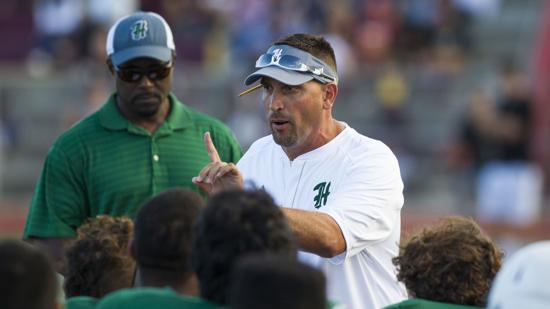 Helix head coach Robbie Owens talks with his team after their scrimmage against Point Loma.

Helix High is starting the 2018 football season right where the Highlanders finished 2017 — ranked No. 1 in the San Diego Section.

And Helix coach Robbie Owens is embracing it.

“After losing a high number of seniors, then to be the preseason No. 1 means a lot to the program,” Owens said. “We’ve had a big turnover, but we talk all the time about the tradition of winning at Helix. Starting the season No. 1 honors that tradition.

“Now it’s up to us to go out and represent Helix the way the players and coaches before us have.”

But the Highlanders return all-section running back Elelyon Noa and all-section linebacker Michael Shawcroft. Christopher Alvarado and Isaiah Jatta anchor the lines on both sides of the ball.

When you’re good — and people know it — scheduling is a problem.

Cajon was 14-2 last season, losing in the State 2-AA title game, and has quarterback Jayden Daniels and receiver Darren Jones back. Daniels threw for 5,139 yards and accounted for 62 TDs. Jones had 102 catches and 28 TDs.

Arroyo Grande was 7-4. Saguaro, the Arizona 4A state champion, was 12-2 last season.

“We’re going to have to come out guns blazing, that’s for sure,” Owens said.

Oddly, Cathedral Catholic, was named first on eight ballots, but is third in the poll.

Mission Hills, which must replace quarterback Jack Tuttle and receiver Chris Olave, got three first-place votes and is No. 4. Tuttle is at Utah, Olave at Ohio State.

Madison is the preseason No. 5.

Some facts about the preseason Top 10:

Votes were cast for 23 different teams.

Only two teams — Helix and Torrey Pines — were named on all 30 ballots.

All seven Avocado League teams received votes, including No. 2 Torrey Pines, No. 4 Mission Hills, No. 6 La Costa Canyon and No. 7 San Marcos.