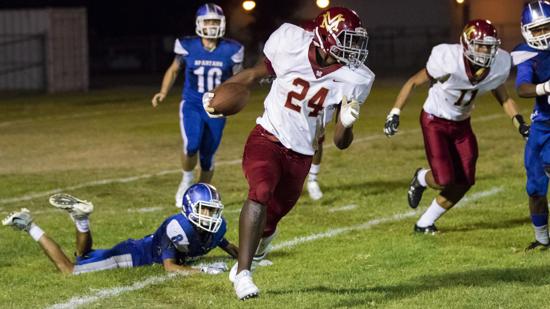 Pennsylvania may be the cradle of quarterbacks, but the San Diego Section is the region of runners. Need recent proof? (Imperial High) starts for the . Redshirt freshman C.J. Verdell is the ’ leading rusher.

The section is again loaded with talented backs and what follows is one high school football junkie’s ranking of the top 10 backs.

The criteria is “best high school backs.” Not future college projections. Level of competition and stats matter. But the most important factor is this: the eye test. Without another stutter-step, here’s one man’s top 10:

Rocky Long learned how hard it is to corral the 6-foot-2, 215-pound back after McClendon flipped on his commitment to San Diego State, moving instead to UCLA.

What separates McClendon is that everyone knows he’s getting his number called, faces 11 men in the box and still produces. With 5,420 career yards rushing, McClendon ranks seventh on the section’s all-time rushing list.

Freeman’s section record of 7,601 yards seems out of reach, but the bottom line is this: No. 24 is one of the best prep backs the section has ever produced.

“He’s that Eric Dickerson type,” said Monarchs coach Ron Hamamoto. “Not only can he run you over, but he’s got speed to run away from you. He’s the whole package.”

Three of the section’s top eight all-time leading rushers played for Cathedral Catholic coach Sean Doyle: Demetrius Sumler at No. 4, Tyler Gaffney at No. 5 and Justin Green at No. 8. Gaffney and Green played in the NFL.

Said Doyle, “I’d put Shawn right up there with them.”

After missing most of last season with a knee injury, Poma has clearly recovered, averaging a whopping 11.8 yards per carry this season. As for proof the 5-7, 190-pound Poma combines speed and power, he runs a leg on Cathedral’s 4x100 relay team and qualified for the state meet last spring in the discus.

There are bigger backs than the 5-9, 185-pound Noa, who rushed for 1,782 yards last season. There are faster backs. But no one is blessed with better natural instincts. And good luck finding anyone more difficult to tackle.

Said Helix coach Robbie Owens, “When we line up on offense, we’ve got the best player on the field, and they’ve got to come and tackle him.”

After Noa rushed for 221 yards on 25 carries against Cathedral, Doyle paid Noa quite the compliment, saying, “He’s our favorite (opposing) player.”

Some local coaches question Christon’s ability to be physical, to which Warhawks coach Rick Jackson said, “Show me the film where he can’t handle it. It just motivates that young man to work harder and prove people wrong.”

Christon’s yards per carry are down slightly compared to last year (9.2 to 11.1). But know this: If the USC commit ran behind Cathedral’s road-grading line, DBs would be fruitlessly staring at Christon’s back on his way to TD runs.

QB Jason Heine is a magician running the No. 1-ranked ’ wing T. The offensive line is athletic and physical. But the juice behind Torrey’s ground game is the fullback, Bingham. Physical and fleet, he’s rushed for 841 yards, averaging 7.4 per carry.

But forget his backfield skills. The coolest thing about Bingham is that with a baseball scholarship to USC in hand, he’s playing football for the love of the game and his teammates.

In the playoffs last year vs. Santana, Richardson set the section single-game rushing record with 499 yards, plus established the single-game record for rushing TDs with eight, later tied by McClendon. Richardson gashed Irvine High for 493 yards back in August, which begs the question: Might the 5-8, 225-pounder bust 500 yards this season?

7How’s this for athleticism? Merrifield runs the sprints in track, is the soccer team’s starting goalkeeper, is an all-league back, plus punts. Said Titans coach John McFadden of the 5-11, 215-pound Merrifield, “Basically, he just breaks tackles and runs over people.”

The section’s best league (Avocado) lands its second back in the top 10. The north-south runner hammered for 165 yards from scrimmage and three TDs. And San Marcos just limited No. 4 La Costa Canyon to eight points. Enough said.

“A power back and he’s got great vision,” said Ramona coach Damon Baldwin. Respected as perhaps the best offensive line coach in the section, Baldwin added this about McDonald, “He’s the best pass-protection running back in the county, hands down.”

The Wildcats average 341 yards rushing a game and Moreno leads the way with 848 yards this season. Starts at inside linebacker, too. Of Moreno’s two-way duties, head coach Jon Self said, “We’re not saving him.”

San Diego Section’s top 10 in rushing yardage this year, according to MaxPreps: