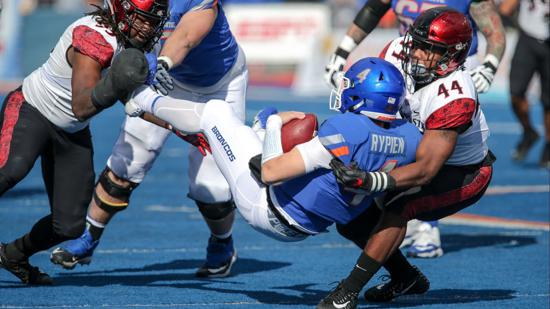 Far better were the Mustangs at soccer, with a state championship won and a notable alum in Luis Silva, who plays for of Major League Soccer.

Nobody from Salesian has made it to the .

But a football pedigree wasn’t the reason Tezino and his family agreed to accept an athletic scholarship to the $8,900-per-year college prep school with tidy uniforms that were a far cry from what the boys wore at Tezino’s neighborhood school in South Central L.A.

Salesian was the road to something bigger and better. Football was merely the vehicle.

“I took it upon myself. Going to an all-boys school was going to keep me focused. I didn’t get the high school experience everybody else did. I was thinking about my future.”

It was a story that would repeat itself as Tezino considered colleges and eventually landed at , where the redshirt junior has become a star playmaker at middle linebacker.

After he excelled at running back and linebacker in powering Salesian to its first CIF-Southern Section championship when he was a junior, dozens of colleges were interested in the prospect rated with four stars by numerous recruiting analysts.

In what seemed like a decision made on a whim, Tezino chose Washington State, and almost immediately regretted it.

“I was young. I wanted to commit to a school and see what it felt like at the time,” Tezino said.

He eventually de-committed, and with Cal, Kansas and Boise State still putting the press on, Tezino chose the Aztecs on signing day in February 2015, much of that due to the close bond he felt with SDSU coach Tony White, who this season moved on to Arizona State.

“I went to a small high school. I like being the underdog,” Tezino said. “Picking San Diego State showed the kind of person I am. I don’t need to go to a big school to show the kind of player I can be.”

There’s no telling how Tezino, whose patience was tested by not playing much in his first 2½ years at SDSU, would have fared elsewhere, but it’s difficult to imagine the current Aztecs defense without him.

Since getting his first career start against Hawaii last November, Tezino has been a terror for opposing offenses.

This season, he’s statistically been one of the best linebackers in the country in the Aztecs’ 4-1 start, and he’s certainly expected to pad his tackle numbers Friday as SDSU hosts the triple-option offense of Air Force.

Tezino is coming off arguably his most important effort as an Aztec. In SDSU’s virtuoso defensive performance in a 19-13 upset at Boise State on Saturday, the 6-foot, 230-pounder was green-lighted often on blitzes and shook up quarterback Brett Rypien with one sack, four hits and two hurries.

When Tezino drove through Rypien like a rag doll and slammed him onto his back in the first quarter, he set the tone for the entire game.

In the backfield often, Tezino peppered Rypien with psychological warfare, too.

Picking the QB off the ground after one pasting, he stuck in the needle with, “You’re better than this.”

According to ProFootballFocus.com, Tezino’s five combined hits/sacks were the most for any linebacker in the country for the week, and his combination on that stat for the season puts him at No. 1 in the nation.

In five games, Tezino is credited with 11 hurries and seven hits on quarterbacks, to go along with his team highs of tackles (39), tackles for loss (4.5) and sacks (3). No Aztecs defender has played more than his 332 snaps.

“He’s getting more confident every single game,” said SDSU defensive coordinator and linebackers coach Zach Arnett. “He’s realizing that as long as he’s aggressive and trusts his instincts, he’s going to be right most of the time.”

Further bringing a smile to Arnett is when the coach leaves the SDSU facility well into the evening and sees Tezino walking to his car after studying game film.

“He’s starting to recognize plays and get some anticipation going,” Arnett said.

Tezino, 21, was a force as a two-way player in high school. In his career, he ran for more than 1,700 yards, averaging 9.6 yards a carry, and scored 13 touchdowns. Those were coupled with 343 tackles and nine interceptions.

He’d been a tailback since his dad, Charles, put him in flag football.

“At times I wanted to score touchdowns and everything,” Tezino said. “But playing linebacker is like being the quarterback. You have to take control of the defense. It’s a leadership position, and that’s what I want to be.”

Arnett doesn’t doubt that Tezino’s ball-carrying experience made him a better defender.

“Physically, he’s as athletic as he needs to be. And he’s got some snap to him. There’s some explosiveness on contact. You can see that.”

As fierce as Tezino is on the field, Arnett said he’s easy going off of it. The coach said he hears high praise from those who work with the players on their academics.

“He’s about as humble as anyone here,” Arnett said. “He’s the kind of guy who everyone gravitates to.”

Tezino — whose first name Kyahva comes from the Creole heritage of his father — said he got much of his nature from his mother, Kelly, who worked as a single parent to provide for him. She is the one who insisted that he attend schools, from elementary on, at which students had to wear uniforms — “for the discipline of it.”

When Tezino arrived at SDSU, the mentor baton was passed to running back , a player with a similar upbringing and character.

Penny set the highest of standards, though the guy who likes to play the underdog is gaining on him.