The hidden gem: Point Loma Nazarene has an NBA prospect in Daulton Hommes 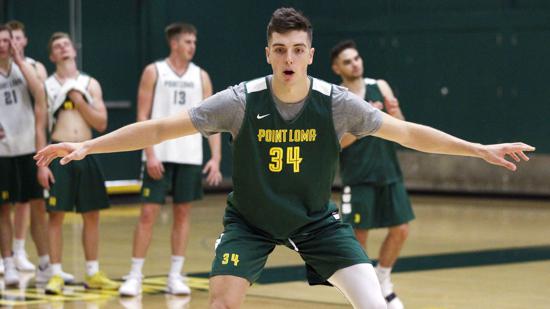 “This is how dumb I am,” Ryan Looney is saying.

It was the spring of 2015, and Looney was head basketball coach at Seattle Pacific University when a high school player and his father knocked on his office door. They were looking for a scholarship.

Looney politely listened to their pitch: A promising junior season was wiped out by a torn ACL, then his senior season, too, when he tore it again. The last time he had played was a sophomore, when he was 6-foot point guard. But he had grown, and he loved the game, and he had great potential, and he’d work really hard.

Looney had most of his roster returning from a team that went 24-8 and was ranked as high as No. 2 in Division II. He had no more available scholarships, and the kid’s family would have to pay SPU’s $50,000 tuition as a walk-on. He thanked them for stopping by and wished them luck.

It is the spring of 2018, and Looney has since become coach at Div. II Nazarene. An email pops into his inbox.

It’s from Daulton Hommes, the kid who sat in his office three years earlier and inquired about a scholarship despite last playing as a 6-0 sophomore point guard and twice blowing out the same knee. He had walked on at Western , and now he wanted to transfer. He was interested in Point Loma Nazarene.

“I was smart enough the second time around to say yes,” Looney says. “I talked to him three times on the phone that day. Forty-eight hours later, we booked a flight for him to come visit. He went home, and a few days later he committed.

“We laugh about it now.”

He also laughs about what else Hommes told him on the phone that day: I think I can play in the .

“I was like, really?” Looney says. “You don’t hear that too much at this level, and if you do you question whether you really want that guy. But as the summer went on, I had more and more people calling and texting me: How did you get an NBA guy?”

Looney is speaking after practice a few weeks ago. A respected scout from an Eastern Conference team was there to watch.

Plugged the campus address into his phone, wound through Point Loma’s residential areas, turned right at Lomaland Drive, drove up the hill past the guard shack and down the other side to the athletic facilities. Took in the sweeping vistas of the Pacific Ocean, then ducked inside a 56-year-old gymnasium with a curved roof to see an even more jaw-dropping sight.

Did he have a couple hours to kill while in town watching San Diego State’s Jalen McDaniels?

Hommes is 6-8 now, hitting a growth spurt while sitting out three straight years — the last two in high school and as a redshirt at Western Washington. He’s athletic. He’s got a quick first step. He finishes strong. He can handle the ball. He can shoot it (oh, can he shoot). He can pass. He can defend.

Looney never saw Hommes in high school, and Point Loma Nazarene didn’t play Western Washington in his two seasons there. But he heard things, heard about the growing legend of the kid from the small Washington town tucked under the Canadian border.

Then his phone started to ring. A fellow college coach called to say Hommes might be headed Looney’s way, to which Looney said it’s done, he’s coming. To which the coach said: “No. Way. I coached in the Pac-12 a long time. That guy’s an NBA player.”

In August, Hommes latched onto a team looking for someone to fill out its roster at Zeke-End, an annual pro-am tournament in Tacoma hosted by Washington alum . Several NBA players were on the floor that weekend: Kyle Kuzma, Zach LaVine, Jamal Crawford, Marquese Chriss, Dejounte Murray.

Hommes had 36 points and 12 rebounds in his first game against several of them. Agents were texting Looney at halftime.

A few weeks later, All-Star forward was cleared for live action following his gruesome, season-ending ankle injury and wanted to play one-on-one against someone of similar size and skill level. Hayward has a home in the San Diego area and shared a trainer with Hommes, later telling the Boston Globe: “He kind of grew and came out of nowhere … He’s really, really good.”

“You know, I definitely wish my injuries didn’t happen,” Hommes says quietly, “but I believe that everything happens for a reason. My story is just going to be a little different. I definitely I have a little bit of a chip on my shoulder. I mean, I was a walk-on at Div. II. I would say I’m a confident individual, but I’m humble enough to know I have to work for everything. Everything is earned, not given. And I’ve just kind of had the underdog mentality to work harder than everyone else.

“There were a couple dark days, but I don’t think it ever lasted more than a couple days. I always thought I could make a comeback.”

Here’s how it is supposed to go: You get noticed on the AAU circuit during the summer before your junior year in high school, draw interest from college coaches, receive scholarship offers, take official campus visits, then sign a letter of intent in November of your senior year.

Here’s how it went with Daulton Hommes:

He made the Lynden Christian varsity as a freshman and came off the bench on a team that won the Washington state title. The following year, he started and averaged 9.5 points.

“A couple of starters graduated, and for all intents and purposes Daulton was going to be our main guy going into his junior season. He was 6-1, creeping up on 6-2, but you could tell he was just a baby deer. He came from an athletic family, and you could just tell he was going to grow. I got a call from an assistant coach at Washington who told me they thought he had a chance to be pretty good and they were going to start recruiting him.

“Literally two days later we were playing a summer league game, and we thought Daulton had a chance to go for 50 (points). He was already over 30 in the third quarter. I know the exact spot on the floor where it happened, the exact spot. I can see it in my mind. It was a loose ball. Daulton bent over to pick it up, and as he bent over a kid dove for it and took out his knee.

“You could tell by the way he went down and the way he screamed, it was not good.”

Except Hommes initially thought it was a mere sprain. He also was Lynden Christian’s starting quarterback, and preseason football practice began a few weeks later.

He lasted two weeks before it gave out. He needed reconstructive surgery. His basketball season was over before it started.

Hommes dutifully attended every practice and every game anyway, intent on building leadership skills ahead of his senior year. He was cleared in the summer. First day back, no contact, a simple crossover dribbling drill … did it again.

Same attitude. He showed up at every practice and game again.

“What kid does that?” DeBoer says. “What kid who knows he’s not going to play his senior year comes to every practice and every game when he could be hanging out with his friends instead, doing other things? That just tells you what kind of kid he is.”

When no one offered him a scholarship, he walked on at Western Washington, a public Div. II school in nearby Bellingham with in-state tuition of $8,600. He sat out his first year to completely heal the knee and adjust to his new body, which was now pushing 6-7.

His first time in uniform was an exhibition at Washington. His first collegiate basket was a two-handed dunk on a Huskies freshman named Markelle Fultz, who the following summer would be the No. 1 pick in the 2017 NBA Draft.

His first official game was against Sonoma State: 29 points on 11-of-13 shooting. He would average 12.5 points that season and lead the Great Northwest Athletic Conference in 3-point shooting at 47.9 percent.

As a sophomore, he averaged 18.1 and had a high of 37. But the team was falling apart, and a teammate transferred to Div. I Grand Canyon. Hommes wanted to leave as well, but because he already used his redshirt year he would burn a season of eligibility sitting out as a Div. I transfer and have only one left. Div. II has no such transfer restrictions.

It was a Christian school, it was a chance to experience college away from home, Looney’s more structured offense suits his game, he has family in Southern California, Point Loma had a scholarship available ...

Eleven days after announcing his intention to leave Western Washington, he posted a photo of Point Loma’s Golden Gymnasium on social media with a message that began: “Three short years ago, the thought of playing college basketball almost seemed impossible to me.”

He has options now, too. He could play one season at Point Loma and turn pro. He could return for a second season with the Sea Lions. He could graduate this spring and transfer to a Div. I program for his senior year without sitting out.

“Once people figured out he could be a grad transfer,” DeBoer says, “we started getting calls from some very major universities. I’m talking the top teams in the country calling, I’ll just leave it at that. Once people started seeing his highlight tape, they were like: ‘What on Earth? What’s this kid doing hiding in Bellingham, Wash.? This kid has skills.’”

Hommes prefers not to talk about next year. He’s a basketball player. He worries about the next practice, the next play, the next game. He’ll sort it out later.

“He literally just wants to be a college kid and have fun with his teammates,” says Looney, whose Sea Lions are picked to win the PacWest Conference. “He doesn’t want to deal with any of it. I would love it if he stayed here for two years. We’d be extremely blessed. But the reality is, if he’s that good, he needs to graduate and just go pro.”

Clint Parks, who has trained several NBA players and currently works with SDSU’s McDaniels, spent time in the gym with Hommes over the summer. Consider him impressed.

“One of the premier wing prospects on the West Coast — big-time talent and high character,” Parks says. “He’s got one of the prettiest jump shots in college basketball and he can really get off the floor as well. I’ve had several NBA front-office guys ask me if I believe he’s draftable, and I do, 100 percent.

“All these scouts are looking for the next sleeper, the next hidden gem, and that’s what Daulton is. If you got NBA game, the NBA will come find you.”