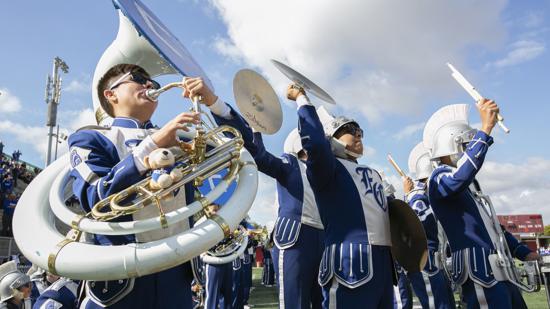 Cal Jones and Jimmie Cannon became iconic figures in the Imperial Valley not long after their arrivals at Central Union in the late 1960s.

Jones was the Spartans’ football coach, and the stadium now bears his name. Cannon served as the band director from 1966-96, and the Jimmie Cannon Theater for the Performing Arts is an El Centro community gem.

Their legacies, however, were in full display Saturday as Central played in its first San Diego Section championship game, losing to Morse 22-16 in Division III to spoil the Spartans’ previously perfect season.

Cannon dubbed his dynamic group “The Great Spartan Band,” and it once performed for the president of Mexico in Mexico City. Then and now under the tutelage of Renee Baker, a Central grad and Cannon protégé, the band has earned numerous state and national honors and distinctions, including performances at Mardi Gras in New Orleans.

Beautiful and spectacular would be understated reviews.

Dozens of fans wore band T-shirts with the inscription “Every Day I’m Shuffling” as a tribute to Central’s signature routine.

“We do a different show for every game,” Baker said. “This is a big event for us. We’re always here to support the team.”

Central kicker Jose Berlin-Torres was late getting to the 1 p.m. game and missed the opening kickoff. While playing in a soccer tournament in Tijuana on Friday, his family’s car was broken into and their citizenship papers were stolen. Berlin-Torres said he spent more than 12 hours at the Mexicali border and wasn’t cleared through until 11 a.m. Saturday.

Morse had its share of legends on hand for the Tigers’ seventh section title. Among them were Eddie Ford, Al Chappell, Conan Smith, Bob Mendoza and, of course, coach John Shacklett. Ford, the section co-player of the year in 1976, and Chappell, his cousin, have coached the Morse JV for six years. As players, they lost twice in the semifinals. “I’m living it vicariously through these guys,” Ford said.

Smith was a two-way star who played for 14-0 title teams in 1990 and ’92. The ’90 team was ranked No. 4 in the country by USA Today. A chip off the ol’ block, Tigers FB/LB Conan Smith Jr. was awarded the game’s Sportsmanship Award on Saturday. “This is familiar territory for me,” Conan Sr. said. “For him, it’s his first championship ever.”

Mendoza coached football and baseball at Morse from 1970-2000. As Shacklett’s defensive coordinator, he won five section banners. Oddly, he said, “This is the first game I’ve been to since I retired.”

Former Helix linebacker Larry Pierce gave an inspirational talk to the Highlanders at practice during the week. Pierce won section titles in 2000 and ’01, returning a one-handed interception 70 yards for a TD with 13 seconds left to seal a 41-30 win over Oceanside in ’01. That game was also notable for the “fumblerooski” — a play now banned. Brandon Halama faked a snap to QB , who faked an option pitch right to Reggie Bush. Meanwhile, guard Zach Burgi scooped up the ball below Halama and raced untouched around left end for a 59-yard touchdown.

Maurice Douglas, who coaches wide receivers at St. Augustine, had the Saints’ familiar StA logo shaved into his hair on the back of his head. “I got it just before the first playoff game,” Douglas said. “I’ve been rocking it ever since.”

The last time Central played for a title was 1954, losing 39-14 to Chula Vista and coach Chet DeVore. Section championship games are now held at Southwestern’s Chet DeVore Stadium. In 1962, DeVore became president of Southwestern and oversaw the construction of the campus. DeVore also played for the SDSU basketball team that won the NAIA national championship in 1941.

Just a junior, Elelyon “Fatto” Noa had played in 10 playoff games going into Saturday’s Division I final against St. Augustine. Going 8-2, he has 206 attempts for 1,899 yards and 19 touchdowns. He had 1,019 yards last year. In two games this fall, he had 633 yards and nine TDs. “No matter who we play,” Helix coach Robbie Owens said, “whenever we line up, he’s the best player on the field.”

Of the 10 schools playing for section titles this weekend, only two of them were outright league champions — Central (Imperial Valley) and San Diego (City). Helix (Grossmont Hills) was a tri-champion with Steele Canyon and Granite Hills.

These championships could very well be the first contested entirely by players born in the 21st century and coaches who were not.

Central coach David Pena graduated from Brawley in 1997 and played center at College of the Desert in Palm Desert before spending the next 18 years in some of the most frigid climates in the continental U.S. He finished his playing career and then coached for six years at Mayville State in North Dakota before coaching stints at Western State Colorado in Gunnison, North Dakota State in Fargo and Nebraska at Kearney.

As St. Augustine’s team doctor for the past 45 years, Dr. Jerry Wisniew has been involved with a lot of star players and successes at his alma mater (Class of 1964). The Saints, however, were just 2-7 in nine section title games during his tenure. Doc’s son, Anthony Wisniew, played a key role in a 41-30 regular season win over Helix in 2004.