Cavers trail by 21, then rally to win SoCal Regional game 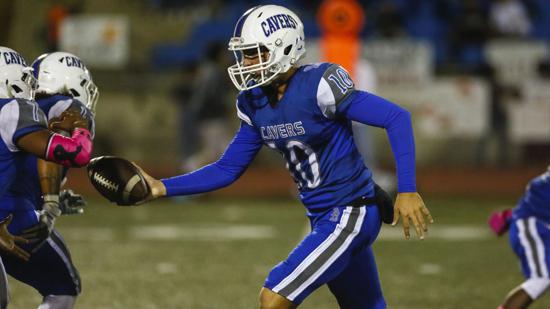 San Diego quarterback Quinn O'Connor (10) hands off to running back Mo Jackson (7) in the third quarter against Kearny.

In today’s supersonic information age, it didn’t take long for San Diego to learn what it would be up against in the Southern California Regional Division 5-A championship game against Linfield Christian of Temecula.

A few taps on the laptop keyboard, and the Cavers discovered that Linfield is the No. 1 scoring team in the state (No. 2 nationally), averaging 56.4 points per game, while yielding only 9.0. The Lions produce 470 yards per game.

It didn’t take long for Linfield to demonstrate its firepower, either, but the Cavers responded with a thrilling, come-from-behind, 42-31 victory over Linfield on Saturday night at Balboa Stadium.

That San Diego (11-2) limited such an explosive team was impressive enough. The Cavers’ comeback from 21-0, 24-7 and 31-21 deficits was downright exhilarating to the 2,000 San Diego faithful.

With the win, San Diego will play for a state championship on Dec. 15. Linfield finished 13-2.

Trailing, 31-21 after Crispin Wong scored on a 13-yard run, San Diego’s Jayden Wickware returned the kickoff 94 yards for a touchdown.

After a three-and-out and forcing a punt, Mo Jackson bolted 57 yards for a touchdown to give San Diego its first lead at 35-31.

Moments later, Jackson recovered a fumble, and the Cavers drove 61 yards with Wickware finishing it on a 1-yard dive for the final score.

“It’s the greatest feeling I’ve had in my entire life,” O’Connor said. “I love this team. I love this school. I can’t wait to represent San Diego at state.

“Every single moment of the game, with the brand of football we play, I never felt like we were out of it.”

Linfield scored on its second possession as Kaleb Maresh found Washington State-bound Travion Brown wide open beyond the secondary for an 84-yard touchdown.

On its next drive, Maresh again connected with Brown on an easy, 27-yard scoring toss.

Maresh then scored on a 1-yard QB sneak for a 21-0 lead early in the second quarter.

San Diego finally countered with a 10-yard scoring pass from O’Connor to Jackson to cap a 5-play, 79-yard drive.

Jackson scored on an 8-yard run to open the third quarter. On the Cavers’ next series, O’Connor hit Jackson on a crossing route for a 30-yard TD to pull the Cavers within 24-21.

Linfield has only 15 seniors and 11 of them have college scholarship offers.

Former Chargers defensive lineman Ben Coleman is the Lions’ offensive coordinator, and Lincoln graduate Akili Smith is the QB coach and offensive consultant. Smith was a Heismann Trophy finalist (third) for Oregon in 1998 and played four years for the .