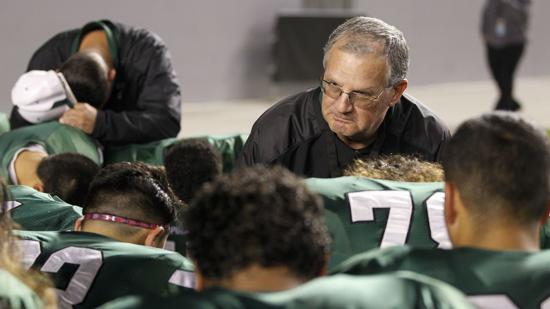 Oceanside's head coach John Carroll and his team bow their heads as they huddle together before the start of the game.

It was the worst defeat of John Carroll’s 26 years as football coach at High, one that he still views with indignation.

In the 2014 state Division I championship, the Pirates fell 68-7 to a Folsom team that boasted record-setting quarterback Jake Browning, a four-year starter at Washington who could be a first-round NFL draft pick.

Last season, Helix got a crack at Folsom in the state 1-AA championship, losing 49-42 in a classic shootout.

Browning threw for 445 yards and six touchdowns against Oceanside as he and the team set state and national records.

Folsom quarterback Kaiden Bennett, who has signed to play at Boise State, threw for 327 yards and six TDs against Helix.

Bennett is back for his senior season and will be calling signals when the Bulldogs play Cathedral Catholic with the state Division 1-AA title on the line Friday at Cerritos College in Norwalk.

“Folsom has the ability to light up the scoreboard,” Helix coach Robbie Owens said of a Bulldogs team that scored 84 last week against Fresno Central in the Northern California championship game.

“Folsom is the greatest show on turf.”

Carroll wasn’t as upset that Folsom was throwing every down with a big lead as he was about a scoop-and-score by the defense on the last play of the game.

“Folsom had its No. 1 defense on the field against our second offense,” Carroll said. “That’s not right.”

Oceanside got to the championship game against Folsom with a 37-22 Southern California Regional win over Fresno Edison. But the Pirates had several players injured in that game and were playing shorthanded against Folsom.

“I love playing teams with great players, guys who’ll play at the next level,” Carroll said. “Unfortunately, Folsom didn’t respect its opponent. They didn’t live up to the motto of Victory with Honor.

“That’s not sour grapes because even if we were healthy, they were significantly better than us ... in the mold of California powers like Santa Ana Mater Dei or De La Salle.

“That was the best football team I’ve ever coached against, but they threw every down, even with a big lead. The starters rarely come off the field. So I don’t respect them.”

Carroll said that after the game Folsom coach Kris Richardson explained he was trying to break records.

Richardson, who didn’t return a message seeking comment for this story, recently told a Sacramento TV station that the Bulldogs “don’t worry about the opponent. We just play Folsom football.”

The explanations don’t sit well with Carroll, who was visibly upset with Richardson.

“They were trying to set records for the quarterback and team,” Carroll said. “That’s not what high school football is all about.”

Owens hinted that he and other coaches in San Diego have banded together to help Cathedral Catholic in its quest to beat Folsom.

“Folsom is the most talented team I’ve coached against,” Owens said. “The quarterback is so dynamic. He throws (3,993 yards and 60 TDs) and runs (431 yards and 12 TDs). And the receivers (Elijhah Badger and Joe Ngata, who’s headed to Clemson) are great. They’re loaded with talent.

“They were all juniors last year when we played them, and I think it’s a tough matchup for Cathedral because Cathedral hasn’t faced anyone like Folsom.

“That being said, Cathedral has (running back) Shawn Poma, a big line and has the ability to control the ball. We got in a scoring fest with Folsom, and that wasn’t a recipe for success.”

“Cathedral needs to slow the pace, control the ball, keep Folsom off the field,” Owens said. “Folsom’s players are used to playing with a lead, so if Cathedral gets ahead, they have a chance.

“Folsom hasn’t changed since John Carroll’s team played them. Folsom’s stats are ridiculous. They’re in it for the bling of the game.

“Cathedral’s offense has to put together time-consuming drives and play keep away.”