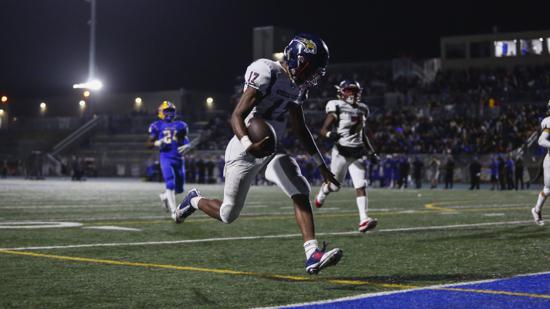 Steele Canyon quarterback Nathan Barnett (17) rushes for a touchdown in the second quarter against Mira Mesa.

Over the years, the Alex Spanos All-Star Classic had gone from one of the best postseason football games in California to a contest struggling to fill rosters.

With a concerted effort from members of the High School Sports Association of San Diego, that changed this year.

“More than 50 percent of those invited are playing,” said former High football coach John Carroll, a key member of the association.

“That’s way up from past years. So we’re pretty excited about this game.”

In the last few years, the association has moved the game from the summer, to the end of the all-star calendar in late December, to the season’s first all-star game.

Even the time has been moved up with kickoff for the 29th annual game at 3 p.m. Saturday at San Diego Mesa College.

This is the longest running all-star football game in California, and this year’s contest boasts 23 All-San Diego Section players — 12 from the South, 11 from the North.

“And we’d have as many as seven more, but Lincoln, San Diego and Cathedral Catholic are playing in state title games this weekend,” said Steele Canyon coach Scott Longerbone, who will guide the South team. “We had a great response from the kids.

“The sports association started inviting players early. The did a great job getting the word out on social media. This is the best of the all-star games.”

Unlike other postseason games, players in the Alex Spanos All-Star Classic pay nothing to participate. It’s the only contest with a pregame banquet, this season a viewing party for Thursday night’s Chargers-Chiefs game, complete with former Chargers players and Chargers Girls. And the all-stars keep their game jerseys.

“We’ve got some dudes,” Longerbone said. “We have a pot of speed.”

Puka Stewart of Otay Ranch and Steele Canyon’s Nathan Barnett will quarterback the South, “and they are super dynamic,” Longerbone said.

“We’re doing to do a lot of things with Puka, and we have a different package for Nathan. We’ll go from a one-back set to two backs because we’ve got great size on the lines with Isaiah Jatta (Helix), Fama Meredith (Montgomery) and Billy Tellous (Steele Canyon).

“Duce Reynolds (Kearny) is a super-talented kid. Our receivers — Albert Lemon (), Casey Granfors () and Daniel Stokes (Madison) will create some problems for the North.”

Ron Gladnick from Torrey Pines is the North coach and said, “If I could play every game with this group, I’d take it.”

Miles Hastings from and Michael Linguadoca of Santa Fe Christian are the North quarterbacks. Linguadoca is a wing-T quarterback and understands the Torrey Pines offense while Hastings is a true passer.

“Remember Hastings was at Torrey Pines for two years, so he knows what we’re trying to do,” Gladnick said.

Oceanside’s Kyrin Beachem, an all-section quarterback, will be moved all over the field, looking for mismatches.

With 2,000-yard runners Dorian Richardson (Rancho Buena Vista) and Mateo Sinohui (Valley Center) along with Luke Armstrong (), who was injured a good part of the season, the North should be able to run the ball.

“And I’m telling you, the two kids from the desert (Thadeo Campbell and Joseph Tarango of Central) can really play.

“Honestly, these kids have really re-invigorated the game.”

Carroll has coached this game more than once, and his son Tom, now an assistant coach at San Marcos, played in it.

“The Spanos game is about football, certainly,” Carroll said. “But it’s also about relationships, getting to know the kids from rival schools, the guys you banged heads with.

“The talent part got away from us a little but, but we have quality players at every position. This is the most talent on a high school football field in a long time.”

Format: North vs. South in football game that features graduating seniors from 2018 season