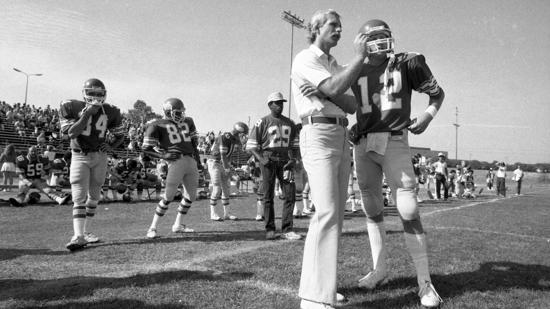 Tom Craft vividly remembers the football game that launched his coaching career. It was 1979, one of Craft’s six years as a Palomar College assistant.

“We got beat up pretty good the week before, so the head coach (Mario Mendez) said I could run the no-huddle offense the next week against Chaffey as long as we were ahead or tied,” said Craft, who with seven others will be inducted into the Palomar College Athletic Hall of Fame on Saturday at St. Mark Golf Club in .

“Then he called off the no huddle, and we lost the game.”

“We changed the tempo, and that started it for me.”

“Those early years were tough, really tough,” Craft said. “I was the head coach for six years before I was hired full time.

“I had a wife and two kids at home, and they liked to eat. So I had to do plaster work to make ends meet.

“Steve White (still Palomar’s offensive line coach) and I were up at 5 a.m., met Marv Heintschel at his family’s cafe, drove to Sun City, working in the sand pit or with the plaster gun.

“We were off at noon, ate lunch in the car, got to school at 1 p.m. and started working on the practice plan, meetings and practice.

“There was no commitment from the administration. The program was an embarrassment. They wanted to drop football.

With Fallbrook’s Scott Barrick at quarterback, Palomar went 7-4 and was Mission Conference South champion. That was the start of a five-year run that saw the team go 45-10, winning national championships in 1991 with San Pasqual’s Andy Loveland at quarterback and 1993 with Tom Luginbill the QB.

“Tom took a 6-foot wing-T quarterback from Torrey Pines, a player who was unrecruited out of high school and turned him into the most-recruited junior college player in the country,” said Luginbill, who went on to play at , play and coach at several professional levels and is now a football expert for ESPN.

“What we did, what I learned, was amazing.

“In ’93, we were running jet sweeps, bubble screens and tunnel screens before anyone.

“We were a no-huddle team when Mouse Davis was running the run-and-shoot. Mouse was the guy, so people thought that’s what we were doing. But we were way ahead of that.

“Tom knew that the best way to attack vertically was to spread the field horizon tally, make the defense cover every square inch of the field.

“I was the son of a coach (Al Luginbill, who was the head man at San Diego State at the time and is now on Herman Edwards’ staff at Arizona State), so I had been around football my whole life. I saw the game differently, and Tom knew that.

“We had a great personal and professional relationship.

“It was a great marriage.”

After the ’93 season, Al Luginbill was fired at San Diego State and replaced by Ted Tollner, who was Craft’s offensive coordinator when Craft quarterbacked the Aztecs to a 10-1 record in 1976.

“I was coming from the L.A. Rams, and I knew Tom was a high-character guy,” said Tollner, who was the head coach at USC for three seasons and worked as an assistant for nearly three decades in the .

“Tom wasn’t a classic dropback passer when we recruited him (out of Monterey Peninsula College), but he found ways to win. That rubbed off on the rest of the team.

“He had a knack for leadership. He was our captain.”

As Tollner’s offensive coordinator, Craft had the Aztecs offense flying high, averaging more than 30 points a game and 400 yards a game.

“Tom’s very smart, very creative,” Tollner said. “We were doing things in ’94 and ’95 that teams are doing now. He wasn’t afraid to try new things. He was way ahead of the curve.”

After three seasons on Tollner’s staff, Craft returned to Palomar in 1997.

Sixteen years over two stints as Palomar’s head coach ended after the 2001 season with a 115-56-1 record when Craft was named head coach football at San Diego State.

“I never wanted to get into the journeyman deal,” said Craft, who saw teammates Edwards and John Fox travel the country en route to NFL head coaching jobs. “So to go back to San Diego State, not even move out of my house in Valley Center, was perfect.”

He brought his high-flying offense back to the Aztecs, but in four seasons, his teams were 19-29, and he was let go after the 2005 season, returning to Palomar as a volunteer assistant where he helped develop former Iowa State tight end into an All-America quarterback.

“I treasured my time at Palomar, especially that 2007 season as a volunteer,” Craft said. “That season was so rewarding.”

Needing a full-time job, Craft became offensive coordinator at Mt. SAC, where his son Kevin was an All-America quarterback before going on to play at UCLA.

In 2010, Craft took over a moribund Riverside City College program and the magic has continued.

The Tigers are 89-15 in Craft’s nine years as head coach and have been to nine consecutive bowl games.

He has worked with 11 All-America quarterbacks at the junior college level.

“I’ve never lost my passion for the game,” Craft said. “I had great mentors at San Diego State — Claude Gilbert and Ted Tollner. It was Ted who told me I could make an impact teaching the passing game.

“Bill Walsh used to let me sit in on meetings when he was coaching the . Walsh was the person who told me I had to keep evolving, to never get stale, to adjust to my personnel.”

Despite a 204-71-1 record as a head coach at the JC level, Craft said sending players on to the four-year level is the most rewarding part of the job.

“Winning is sexy,” he said. “But getting kids ready to transition out and play at the next level is what makes a program.”

Other inductees into the Palomar College Athletic Hall of Fame:

Palomar’s Athlete of the Year in 1963, Castro was All-South Coast Conference in football and baseball that year. He completed his four-year degree at Augustana College in Illinois and earned a master’s in 1985. He was an assistant wrestling coach at Bettendorf High in Iowa for 18 years and head coach for six and was selected National High School Assistant Coach of the Year in 1982 by Wrestling USA.

After playing at Carlsbad High, Davis was a starter as a freshman on Palomar’s 35-13 team in 2006. As a sophomore, she hit .385 with eight homers and 36 RBIs. She went on to play at Lubbock Christian, helping the team to back-to-back NAIA national championship appearances and a title in 2008. She returned to Palomar as an assistant softball coach from 2010-2014.

Coming from Escondido High, Clark — a wide receiver — was the Mission Conference Offensive Player of the Year in 1979 and the Comets’ first J.C. Grid-Wire first-team All-American when he set then school records for catches (74) and receiving yards (1,042). He went on to play at Nevada, starting for two seasons before signing as a free agent with the Cleveland Browns.

Funderburk burst onto the running scene after a standout career at Vista High. As a freshman at Palomar he won the Southern California Regional mile championship and finished third in the state meet. He won at the Aztec Invitational cross country meet, won the mile at the San Diego Indoor Games and had a hand in six individual or relay records at the end of his sophomore season. He accepted a scholarship to San Jose State and was a member of the 1969 NCAA outdoor track and field championship team.

After playing at Mt. Carmel High, Krainock became the first of Palomar’s no-huddle quarterbacks under then assistant coach Tom Craft, throwing for 2,983 yards as a sophomore. He went on to play at Richmond, throwing for 20 TDs and running for five over two seasons. After college, he went to camp with the , San Francisco 49ers and San Diego Chargers.

A transfer tight end from Iowa State, he was selected California’s Offensive Player of the Year and a first-team J.C. Grid-Wire All-American after being converted to quarterback by Craft and passing for 2,960 yards. He went on to play at Connecticut, leading the to back-to-back bowl appearances. An All- selection, he played in the NFL for the and , earning a Super Bowl ring in 2010.

A two-sport star at Orange Glen High, Tanner played football for the Comets and was an All-America heavyweight wrestler. He moved on to Clemson and qualified for the NCAA Championships in 1979. He worked as a football graduate assistant coach at Northwestern and earned his medical degree from . He worked as a clinical radiologist in Iowa for 30 years and is currently a radiologist in Southern California.